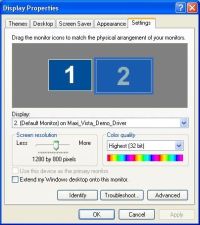 MaxiVista is an innovative Windows utility that can perform a number of useful functions via a network connection, including extending a PC’s display to monitors of other computers, remotely controlling multiple systems using a single keyboard and mouse, and making Windows clipboard contents available across several systems. MaxiVista can be a very useful tool; more so for XP users than Vista ones due to its limited compatibility with the latter operating system.

MaxiVista’s Vista compatibility problem lies in the operating system’s WDDM (Windows Display Driver Model) graphics architecture, which doesn’t allow graphics adapters — real or virtual — from multiple manufacturers within the same system and thus precludes you from using a Vista system as a MaxiVista primary PC. The only way to bypass this restriction is to downgrade your physical graphics card’s native Vista drivers with older XP-compatible ones. However, using XP graphics drivers in Vista may cause reduced system stability, and it will result in the loss of UI features like Aero Glass and Flip 3D.

Because Microsoft imposes the WDDM driver limitation, MaxiVista’s developer is not in a position to fix the situation. Running old drivers will not be a reasonable workaround for most. The saving grace is that you can use Vista systems as secondary PCs without modification or restrictions.

By now, you’re probably wondering how a program with “Vista” in the name can be anything less than fully compatible with that operating system. It turns out MaxiVista’s been around since 2003. The name evidently refers to the literal definition of “vista,” NOT Microsoft’s latest operating system.

We installed the MaxiVista server and viewer onto desktop and notebook systems, respectively. Both were running XP, and both were connected to our LAN — the desktop via a wired connection and the notebook via 802.11g Wi-Fi. Once the virtual display adapter was loaded on the primary system, we were able to use XP’s standard display controls and configure it as a secondary display. When we double-clicked the MaxiVista tray icon on the desktop PC, the notebook’s display became an extension of primary PC’s Windows desktop within a second or two, and we were able to drag Windows over to take advantage of the new desktop real estate. If you’re using a software firewall, you may need to configure it to allow MaxiVista access to the network. 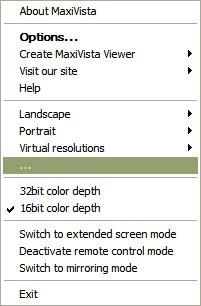 MaxiVista lets you choose from multiple resolutions for the secondary display and supports both portrait and landscape modes. But because there’s no physical graphics adapter behind a MaxiVista’s secondary display, you will not want to use it for anything that relies on graphics hardware acceleration, such as playing games or DVD movies. Even streaming relatively low-res videos in a browser (e.g., YouTube) on the secondary display resulted in less than satisfying results until we ran MaxiVista’s included network optimizer feature, which configures usage of network bandwidth and CPU resources (needed for compression).

Post-optimization, we were able to stream Internet content with acceptable quality, but ideally you’ll want to limit the secondary display to applications with static content, like office applications (such as e-mail and IM utilities).

MaxiVista’s link between systems also acts as a conduit for remote control and clipboard integration features. Switch to remote control mode, and the keyboard and mouse of the primary PC can be used to operate the secondary system while you view the latter’s native display. This can be extremely useful for anyone who wants to control multiple PCs without having to buy a hardware KVM (keyboard-video-mouse) switch, which in turn often involves the need to reconcile mismatched interfaces like PS2/USB for keyboards and mice or VGA/DVI for monitors.

While MaxiVista is in remote control mode it automatically synchronizes the clipboard contents of the primary PC to the secondary one, or vice-versa. The shared clipboard can be a convenient way to move data quickly between systems, and it can be disabled if desired. Some will want to, since it using it overwrites anything already in the system’s clipboard.

In any event, we had mixed results with the shared clipboard feature; although it successfully copied text, we had no luck transferring files with it. Since file transfer is done through shared folders, we suspected a firewall issue. However, the problem persisted even when the firewall (in this case, the Windows Firewall) was disabled on both systems.

We tested the priciest — and we’d say somewhat overpriced — $99.95 “Mirror Pro” version of MaxiVista. If you can live without desktop mirroring, a Professional version omits this feature and lowers the price to a far more attractive $39.95. There’s also an even less-expensive Standard version ($29.95) that eliminates both the remote control and synchronized clipboard features and limits you to one extended screen (as opposed to the three supported by the other versions). A demo version of MaxiVista Standard is available for a 14-day trial period or 50 program launches.

MaxiVista’s inability to work with native Windows Vista graphics drivers is unfortunate and definitely the product’s Achilles Heel. For XP users, MaxiVista can be a simpler and less expensive alternative to buying hardware like graphics cards and switch boxes.

Joseph Moran is a regular contributor to PracticallyNetworked.