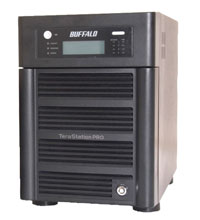 The answer to the question “Can you ever really have too much disk space?” is usually no — at least, it is for many of us. When you need copious amounts of sharable storage NAS drives are the way to go, and few devices provide more of it than the Buffalo TeraStation Pro II.

Storage Options and Hardware Features
Buffalo keeps the Pro II’s storage capacity options relatively simple, because it comes in only three sizes — 1 TB, 2 TB, or 3 TB. All Pro II models regardless of capacity house four 7,200 RPM SATA hard drives and let you organize those drives using as many different levels of RAID. As a result, there should be one for anyone’s comfort level whether you value speed (RAID 0), data redundancy (RAID 1) or a little of both (RAID 5, which is the default setting).

The Pro II also offers an additional disk configuration — RAID 10 — that’s something of a hybrid between RAID 0 and 1. It configures one pair of disks as a single volume (rather than as two individual drives) and mirrors it to the other pair. This provides some of the performance benefit of RAID 0’s disk striping while retaining the same level of data redundancy of RAID 1 — though as with RAID 1, you halve the unit’s usable capacity. The Pro II doesn’t support non-RAID disk configurations such as JBOD or spanned volumes.

If the Pro II’s internal storage proves insufficient, two USB ports on the rear of the unit allow you to external hard drives, but the ports don’t provide the print server feature found in lesser non-Pro TeraStation models. The ports on the Pro II in particular can be used to connect a UPS for automatic shutdown in the event of power loss (there’s also a 9-pin serial port provided for the same purpose). Buffalo says only APC SmartUPS units are officially supported, though others may work as well (we tried an APC Back-UPS XS 1300 which worked without a problem).

The Pro II connects to your network via a 10/100/1000 Mbps Ethernet port. In addition to an array of status lights, the Pro II provides a configurable LCD readout that’s backlit and displays information including the unit’s network configuration IP address, RAID mode, and status of drives. The drive cage is accessible behind a locking panel, though unlike with some other NAS products, the drives within aren’t hot-swappable. Although they can’t be replaced while the unit is in operation, they’re what Buffalo calls “quick-swappable”, which essentially means that the drive trays can be removed without tools — the drives use a combined data/power cable connector which simplifies things a bit as well.

Setup and Administration
The Pro II includes a Windows utility that scans your network for the device and then walks you through selecting initial configuration settings like choosing the administrator password and RAID mode you prefer. It also illustrates the steps of physical installation with a helpful series of pictures (that you must view whether you need them or not). The Pro II automatically helps itself to an IP address via DHCP, so you always have the option of dispensing with the software and configuring the unit directly via a browser, which is where most of the advanced configuration tasks must be performed anyway.

The Pro II supports Windows, Mac (including older AppleTalk-based ones), and Linux clients, and will perform Windows Domain and Active Directory authentication so it can use an existing set of users or groups in either type of network environment. Otherwise, creating your own accounts is easy to do through the Pro II’s administrative interface.

Individual shared folders you create on the Pro II can be set up to allow FTP access, and you can also enable a Recycle Bin feature that can be used to recover deleted files (which are retained in a special “trashbox” folder). The Pro II can also participate in a DFS (Distributed File System) on a Windows Server 2003 network, allowing you to include shared folders from a variety of physical servers in a single unified heirarchical view.

The Pro II can notify up to five recipients via e-mail in the event of disk or fan failures (or just provide periodic status reports), but as with many NAS devices, the mail notification won’t work with mail servers that require authentication.

If you’re not using a fault-tolerant form of RAID (or if you just want an additional layer of data protection) a built-in backup utility will backup the Pro II’s data to an attached USB drive. You can also backup to another TeraStation unit, but since the Pro II has only a single Ethernet port you can’t offload that traffic to another network segment. The Pro II also ships with a (single-license) copy of Memeo AutoBackup for use with a client system.

We simulated a disk failure by powering down the Pro II and relieving a drive of its data and power connections, and upon rebooting an audible alarm sounded and the LCD display announced the unit was operating in degrade mode. While operating on three drives, the Pro II was somewhat less responsive, but was still able to deliver a nearly 80 Mb/sec video stream in its hobbled state.

After replacing an errant drive, you do have to manually initiate the volume rebuild process, though the Pro II conveniently displays a link to the relevant page as soon as you log in. Although it’s disabled by default, you can set up periodic RAID scans, and the unit will promptly shut itself down if any errors are detected.

Our wish list for the Pro II would include a print server, hot-swappable drives and perhaps a second Ethernet port. But in spite of those omissions the Buffalo TeraStation Pro II is a solid product that provides fast storage, lots of it, and flexible configuration options to boot.