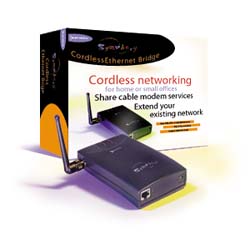 Bottom Line: Easy to install and use

but will cost you speed and $.

This product is no longer being manufactured. No updates (hardware, firmware, or software) will be made. These pages are provided as a reference only. This product has been replaced by the Symphony HomeRF Base Station

The Proxim Symphony Cordless Ethernet Bridge allows you to easily connect your Symphony wireless network into an existing Ethernet-based network.  It can act as a Transparent Bridge, a NAT router or both. In simple terms, this means that you can add computers equipped with Symphony wireless cards (sorry, but it doesn’t work with other wireless cards) to an existing Ethernet-based network and be able to have File and Printer sharing and Internet access work among both types of computers.  Although the product description describes connection only to high-speed Internet access devices, you can use it with normal dialup routers too.

The product comes with the following items:

The bridge is a small black box, measuring about 3.25 in W X 5.25 in D X 1.25 in H.  A small (approx 3 in) antenna comes attached to the front of the unit.  It’s attached via a BNC-like connector, but the antenna screws on instead of having a 1/4 turn twist quick disconnect.

Installation was very smooth and I didn’t even need to consult the very detailed User Manual until after I was already surfing the Internet via my Symphony-PC-Card-connected laptop.  The Bridge is preconfigured to be a DHCP client and perform both NAT routing and “Transparent Bridging” (more on this later) between the Ethernet and wireless LANs.  Proxim figures that this configuration will work with most network and ISP combinations and it worked fine for me. You can change these settings, but only via the “Maestro” configuration tool that is installed with a Symphony network card.

If you are installing your Symphony network from scratch, the supplied Quick Start card instructs you to install the Bridge first, so that’s what I did.  All you do is plug in its external power adapter and then connect it to your existing LAN.   NOTE that your LAN must support 10BaseT connections.  Proxim supplies a short “crossover” cable that you may or may not be able to use, depending on what you are connecting into (this is explained clearly in the User Guide).  I connected the Bridge into a UMAX UGateII dialup router which has a built-in 4 port 10BaseT hub.  Since the UGATE II hub contains an uplink port, I used a normal UTP cable connected from the UGateII uplink port to the Bridge.  Again, you may have to experiment with the type of cable you use, but you’ll know when you’re connected correctly… just look for the lit Link lights on the Bridge and the device that you’re connecting to.

With the Bridge plugged in, I installed a Symphony Cordless PC card into my Win98 laptop (400MHz AMD K-6, 64Mb memory). This went smoothly and after the third reboot, I launched my web browser and was rewarded with my normal Home page!  I then checked Network Neighborhood and saw my other PCs’ shared drives and printers.  Pretty slick!

Although my installation went very smoothly, there are a few things that you may need to pay attention to, depending on how your network is configured and how you are connected to the Internet:

Which Bridge configuration to use
Section 6 of the User Manual (Configuring a Symphony Network) does a good job of describing the conditions that may cause you to change the Bridge from its default mode of both NAT routing and “Transparent Bridging”.

In my case, since the UGateII router was handling Internet access and NAT routing, I changed the Bridge to Transparent Bridging only (the second selection). This got rid of the 10.0.0.X subnet that the Bridge’s NAT router had assigned to the wireless cards.  I then had to reconfigure the TCP/IP settings on the Symphony PC card so that it was a DHCP client of the UGateII.  When I was done, I had File and Printer sharing and Internet access working among all machines, using only the TCP/IP protocol.

If this sounds like too much trouble, you could leave the Bridge configuration alone and just add the NetBeui protocol to all machines on the network.

How many computers on your LAN
This should not be an issue in small networks, but Proxim says that the Bridge can only support 8 devices on its Ethernet port.  The number of Symphony wireless nodes is limited to 10.

Adding protocols
The installer adds and configures TCP/IP (and some proprietary Symphony protocols) but does not add NetBeui or IPX/SPX protocols unless you already have either protocol installed and bound to another network card.  In most any network configuration, you should be able to get Internet access from both Ethernet and wireless nodes using TCP/IP only.  However, if you are adding wireless nodes to an existing Ethernet network, you may need to add the NetBeui or IPX/SPX protocols to all computers if you have problems seeing wireless computers from wired ones (and vice-versa) in Network Neighborhood.  Otherwise, you’ll have to change the operating mode of the Bridge as described above.
(NOTE: This ability to use the non-routable NetBeui and IPX/SPX protocols is a nice benefit of using a Bridge instead of a Router to handle a LAN with multiple subnets.)

Which drivers to use
The Quick Start and User guides have multiple warnings, but it’s worth mentioning that you need to use the drivers that come with the Bridge to install any Symphony network cards.  If you already have a working Symphony network, Proxim provides an Upgrade utility so that you don’t have to uninstall the existing drivers.

One other small, but important item to note is that the installation wizard walks you through setting up shared drives or folders, but sets full permissions with no password on anything it sets up sharing on and doesn’t warn you that it is doing this.  The User Manual does mention password protecting shared resources, but I’d like to see either a warning in the installer or a default of password protection.

Here’s the data I used to reach these conclusions.  I used the same 5.30MB zipped file for each of the tests and rounded transfer rates to the nearest 10kbps.

The Bridge is easy to use and solves a problem that would otherwise require fairly advanced networking skills.  Although the cost is probably more than you’d want to spend, it’s significantly lower than competitive products (which are geared toward corporate use).

It’s clear that Proxim has put quality work into the Symphony product line.  The documentation is tops, the software is well done, the support Web site contains useful information, and you even get a utility that tells you something about the quality of your wireless connection (something I’d like to see as standard for all wireless and maybe even phoneline networking kits). Unfortunately, using the Bridge will slow your Symphony network significantly, even if you aren’t transferring data between the wired and wireless portions of your network.