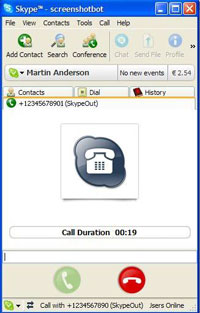 You might be forgiven if you had never heard of Skype prior to it being purchased by eBay a little more than a year ago. Skype’s VoIP software has had a much higher profile since then, particularly after the company announced a promotion — which has since expired (on 12/31/06) — offering unlimited free calls to “real” phones in the U.S. and Canada.

Skype is ushering in the New Year with an update to the Windows version of its software (versions are also available for Mac, Linux, and Pocket PC/Windows Mobile platforms), but before we delve into the new Skype 3.0 let’s go over the basics of how Skype works for those not familiar with it.

Skype’s software, which is available free of charge, lets you make voice and video calls (also for free) to other Skype users worldwide. You can also use the optional SkypeOut feature to place calls any PSTN phone — you purchase SkypeOut credits to pay per-minute charges, which vary depending on where you’re calling (but are usually measured in mere pennies per minute). Last but not least, another optional service called SkypeIn lets you obtain a real phone number for your account, making you reachable via Skype by anyone with a regular phone. (SkypeIn also comes with voice mail).

Setup
If you’re accustomed to Skype 2.5, you’ll immediately be quite comfortable with version 3.0. There have been a handful of tweaks designed to streamline the tabbed interface while at the same time emphasizing features that were not always easy to find pervious versions. By and large, though, basic functions work in 3.0 much the same as in the prior version.

Skype now helpfully adds a test call to your contact list automatically. Placing the call plays an automated message and allows you to record and listen to one of your own, to help ensure your microphone and speakers are set at appropriate levels. You can build up your Skype contacts by searching a directory of Skype users to add to your list or by manually adding entries (by Skype name or PSTN phone number). Whenever you call someone not on your contact list, you’re given the opportunity to easily add that person to it.

Making Calls
Placing calls via Skype is a simple task — you can either double click a contact to start a voice call, or choose from a right-click context menu to initiate other forms of communication (text chat, leave a voicemail, send a file and so on) There’s also an on-screen keypad for placing SkypeOut calls. Just as you can with IM software, you can change your Skype online status to reflect your desire to communicate (you can set your account to indicate you don’t want to be disturbed) and if you’re feeling particularly sociable you can set your status to “Skype Me” which lets other Skype users know you’re up for unsolicited communications. 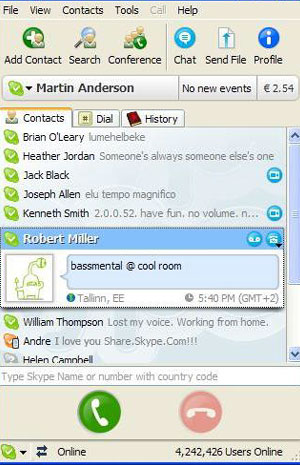 There were only about three dozen or so Extras available as of this writing, a number that will likely grow. Indeed, if widely embraced by users (as happened with Yahoo! Widgets) the usefulness of the Skype Extras feature is likely to improve significantly with age.

More on the practical side, you can set up conference calls among multiple Skype users, and you can include SkypeOut calls in conferences as well. If you have a webcam you can add video to your calls with other Skype users. The video feature worked well even with a 4-year-old Logitech QuickCam we had lying around.

Skype call quality is usually quite good — often as good or better than what you’d expect from a mobile phone. We had no difficulty placing high-quality calls with a 6 Mbps downstream/ 384 Kbps upstream cable modem connection, and we also got pretty good results (albeit with occasional sound gaps or echos) when using a much slower 768 K down/ 128K up DSL link.

Upstream bandwidth tends to be fairly important with Skype, particularly if you’re on a call (especially a video call) while engaged in bandwidth-sapping activities like uploading files or sending e-mail attachments. When bandwidth is scarce or general network conditions are otherwise less than optimal, calls can devolve into unintelligible, herky-jerky sound bites, but for most users it shouldn’t be an especially common occurrence.

Additional Features
Originally available only as separate add-ons, Skype Toolbars for Internet Explorer and Firefox are now built-in to Skype 3.0. Anyone that frequently makes calls via SkypeOut in particular will find the browser toolbars useful since they automatically detect and highlight phone numbers found on Web pages, which lets you place calls to those numbers with one click (it works with Skype names as well). There are Skype toolbars available that do the same thing within Microsoft Office documents or Outlook, Outlook Express, and Mozilla Thunderbird e-mails, but they still must be downloaded separately.

Also new to version 3.0 are Skype Extras, which are essentially third-party plug-ins that provide additional features or ways to communicate. Thus far, most of the Extras are either games or otherwise whimsical in nature (such as an animated avatar), but some appear to have more practical purposes. There are Extras that can record calls, speak and translate chats in real time, and one that purports to analyze voices for stress (sort of a Skype-based lie detector). Given that these Extras are developed from various independent sources, the quality and documentation — often little to none of the latter — of Extras can vary. Skype Extras also may or may not be Skype-certified, and we definitely had better luck using ones that had been certified.

If you’re looking for something more than just one-on-one communication, you can click Skype’s Live tab and choose from among various “Skypecasts” or live public conversations. This feature is still in beta, and at least as of this writing, we didn’t find it particularly compelling. There were plenty of Skypecasts going on during the times we spent testing, and the ones we joined appeared well-attended — many had dozens of participants — but it was difficult to make anything out though a din of muffled voices. (Amusingly, we found one Skypecast that required participants to remain silent for 20 minutes as “an experiment in global consciousness”.) It’s also worth noting that many Skypecasts are conducted in languages other than English, which isn’t surprising given that Skype is more popular in Europe than in North America.

For those who don’t know a lot of Skype users, the capability to place cheap long-distance calls or international calls via SkypeOut will be a major factor when considering the software. Even though the free SkypeOut calls promotion is now history, Skype is offering a new flat-rate plan that’s the next best thing. If you sign up before January 31, 2007, you can get a year of unlimited calling within the U.S. and Canada for a paltry $14.95. (Afterward, the cost doubles to $29.95, which still isn’t bad.)

As for international calls, Skype has indicated that changes are also afoot for its international rates. Full details are due to be announced on 1/18, and while Skype says its new pricing will be “disruptive” it remains to be seen whether that’s good or bad for SkypeOut users.

Although Skype 3.0’s new features like Extras and Skypecasting aren’t earth-shattering (at least not yet), it continues to be a good choice for those looking to keep in touch with friends, family or colleagues throughout the globe.