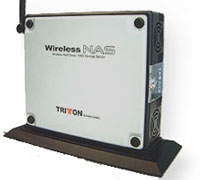 Most folks who set up wireless networks in their homes do so for the express purpose of sharing a broadband Internet connection. Increasingly though, even home users often want to share large files (i.e. streaming media) across a wireless connection, particularly in the growing number of multiple-PC homes. While this can be done by sharing a portion of a PC’s storage—either an internal or external had disk—that storage is available only as long as the host computer is present, on, and functioning properly.

Another way to achieve the same goal is via self-contained wireless storage that isn’t dependent on a particular computer. An example of this kind of device is the Tritton Wireless NAS, whose built-in hard disk and 802.11g radio ensures it will be self-sufficient and available to wireless clients.

While using the Tritton NAS for shared wireless storage may be superior to PC-based storage in many respects, the device has a number of shortcomings that tend to mar the overall value.

The Tritton Wireless NAS is available in either 120GB or 200 GB capacities. (Larger capacities are on the horizon, as well as a no-drive enclosure for do-it-yourself types.) The drives are housed in a plastic chassis that can be operated either horizontally or vertically on the desktop. For improved stability in the latter orientation, a weighted and bolt-on base is included. Adjacent to the Tritton’s adjustable dipole antenna sits a 10/100 LAN port (ostensibly for initial configuration), but the company neglects to include a CAT5 cable in the package, so you’d better have one lying around.

Installation and Setup
The Tritton Wireless NAS was very simple to get running. It includes a discovery utility that can locate the drive and launch the administration console, but I performed initial configuration by going directly to the browser.

To make toting the drive between multiple locations more convenient, the Tritton can retain IP settings for three separate networks. That certainly helps, but there isn’t any way to select the profile you want via a physical button (think the Linksys WGA11B game adapter, for example). Therefore, you must remember to pre-select the new profile before you turn off the unit and go to the new location.

Most users will probably choose to leave the drive in one place, but the Tritton Wireless NAS can’t be set up as a node on an existing WLAN. Instead it must function as an independent access point in order to provide wireless connectivity to its internal storage. This means that in most home scenarios, when you want to access the Tritton’s storage you must associate to entirely different SSID then the one you with your wireless router to access the Internet. This presents an obvious problem if you want to simultaneously stream audio from the Tritton and browse the Web, for example.

While you can get around this issue by giving the Tritton a path back to your router via CAT5 cable, doing so introduces two additional problems. First, by tethering the Tritton you lose the placement flexibility a pure wireless connection affords you. Second, this arrangement opens up your Internet connection and the rest of your network (not to mention the data stored on the Tritton) to any to every client within range. This latter fact would be less of a concern if the Tritton provided a form of encryption more robust than WEP, but it doesn’t. The Tritton also lacks even a rudimentary form of access control like MAC filtering, making less than the ideal place to park sensitive data. (Tritton says that the ability to join an existing network and WPA support is planned for a firmware upgrade sometime this quarter.)

File Sharing Weak
Unfortunately, the Tritton Wireless NAS provides very little flexibility when it comes to file sharing capabilities. For example, the device provides a half-dozen pre-defined shared folders— one is labeled public, and the rest share1 through share5. While these folders can be renamed to something more meaningful, you can’t delete any of them, nor can you create new shares of your own.

As far as managing access is concerned, the Tritton Wireless NAS is equally unyielding. For starters, the unit can’t obtain a list of users from a Windows domain, though this is forgivable given the fact that the Tritton is designed to be used in home/SOHO environments.

Less justifiable is the fact that the unit doesn’t offer user-level access at all— instead, share-level security is the only option available. Each of the aforementioned shared folders can be configured to allow read only or read/write access, or both (depending on the password used). This type of access may be sufficient for some, but many will find it limiting.

Finally, all file access must be done through the conventional Windows networking model of browsing Network Neighborhood or mapped drives. It would be nice if the Tritton also offered file access via Web browser, at least for purposes of streaming media.

Tritton includes a bundled client application which can be used to backup data (including open files) to the unit.

When dealing with network storage, a question arises as to how disk error checking and defragmentation operations are performed, and in the case of the Tritton, you can’t initiate either of these manually via the administration console. The company says the unit’s file system continually checks for errors and always stores files contiguously to minimize any fragmentation problems.

The Tritton Wireless NAS has a lot of potential, but unfortunately many current flaws as well. In its current iteration it leaves much to be desired, but with new firmware that addresses the issues discussed above, it will be worthy of consideration as convenient centralized storage for your wireless network.