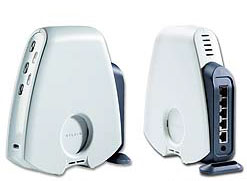 The SOHO or home network in need of quick and dirty connectivity between Windows PCs will find Belkin’s stylish 5- and 8-port Network Switches a breeze to setup — especially with the utility software included to make the changes you need to your network settings. Sadly, the setup utility doesn’t work with Windows 2000 (though the hardware works fine with Win 2000). But you can’t quibble with price: it’s only $77.99 direct from the company, and well under $50 at retail.

Updated Cons list to remove note about no uplink port — the 5-port version has auto-uplink. 8-Port version has uplink on port 1 when you depress button on the back of the unit.

It’s the proverbial plug-and-play — connect all of your PCs to this store-and-forward switch with Ethernet patch cables (Belkin of course says to use their Cat5e or Cat6 cables, but I didn’t) and plug in the power. After that, you can install the Belkin NetSetup and Belkin NetShare Utilities on each PC via the included CD-ROM. The CD also has an Acrobat copy of the manual. Run the NetSetup wizard and you’ll be asked if you’re connecting a system on a current network or starting anew. Follow the instructions to make sure you’ve got a different node name but the same workgroup name, and then run it on all the computers, and you’re in business.

When we ran NetSetup, it was fine on Windows 98 SE and ME systems (the lowest rated operating systems suggested for this switch by Belkin), but NetSetup won’t even launch under Windows 2000. Instead it sends you directly to the Network Connection Control Panel. Anyone with some Windows networking savvy will not have a problem with this, but it’s not good news for the newbie networker.

Instead, if you jump into the NetShare utility, you’re given an easy interface for making the changes you need, as well as for setting up shares on your drives and printers.

The Belkin 5-Port unit we tested has a molded plastic, new-age look that’s obviously geared toward consumers. It can be wall-mounted if you pay extra for the wall mount kit, which is supposed to be available at Belkin’s Web site, but I couldn’t find it there. The same rounded docking ring slot used for the wall-mount can dock the switch with other Belkin switches, or the Belkin Cable/DSL Gateway Router.

This unit features five lights on the front that either show green if the connected PC on the matching port is running 10Mbps, or amber for 100Mbps. When they’re blinking, the data’s flowing, naturally.

Since this is only a switch, don’t expect much more than simple data and printer sharing when you set up Windows properly. If you want to share an Internet connection using this switch, you have to use Windows built in NAT-based Internet Connection Sharing.

As you would expect, data running from computer to computer (all with 10/100Mbps NICs) through this device, as checked with Qcheck, is blazing.

(Read details on how we test.)

Is the Belkin 5-Port Network Switch perfect? Of course not, especially for newbies with Windows 2000 (and likely XP) systems they need to get talking to each other. Simple home networks that are usually running 98 SE or XP, however, will see the benefits instantly.