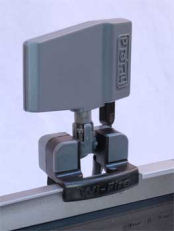 Pros: makes useable connections from Wi-Fi signals too weak for internal adapters to connect to or detect

Sometimes you come to the realization that the equipment you have isn’t quite up to the task at hand. A good example (albeit fictional) is in “Jaws,” when Chief Brody tells shark-hunting fisherman Quint, “You’re gonna need a bigger boat.” Similarly, when you want to access a distant Wi-Fi network or one with an otherwise feeble footprint, you can’t always count on a notebook’s internal wireless adapter and antenna to find it or pull in enough of a signal to make for a usable connection.

Fire in the sky

The Wi-Fire Wi-Fi adapter from hField Technologies can greatly improve the ability of a notebook–or a desktop, for that matter–to find and make use of evanescent Wi-Fi signals. We first reviewed the Wi-Fire over a year ago, but there’s now a new iteration (the third generation, model HFWFG200)–a more refined version of the previous design, which it replaces. Considerably more compact than its slab-sided predecessor–hField says the new model is 40% smaller and 30% lighter–at $59, the new Wi-Fire also rings up $20 less expensive.

The Wi-Fire is a USB-based 802.11b/g adapter (alas, the Wi-Fire’s Atheros AR5007UG chipset doesn’t do 802.11n) paired with a high-gain directional antenna and compatible with Windows, Mac, or Linux systems. (Windows and Mac OS X drivers are included in the box, while Linux software can be downloaded here.)

The Wi-Fire adapter and antenna are housed within a single trapezoidal plastic package which connects to an available USB port via a three-foot cable (the kludgy retractable cable of the previous model has thankfully been jettisoned). The Wi-Fire’s built-in plastic base has been redesigned and provides a very stable platform from which to aim the antenna on a flat surface. The Wi-Fire can rotate 360 degrees on its base, but positioning the device becomes a two-handed operation once the USB cable connector, which protrudes from the bottom of the unit collides with the adapter base (beyond about 150 degrees). The Wi-Fire base’s “feet” rotate downward allowing you to perch the device atop a laptop display for a bit of extra altitude, but it’s not a snug fit and can be somewhat precarious, especially if you tend to position the screen at a steeper-than-normal angle to the keyboard.

Out of thin air

After setting up the Wi-Fire on our test HP laptop (a simple matter of installing the driver software and then plugging in the device) with Windows 7 Home Premium, we set out to see how well it would be able to sniff out Wi-Fi networks compared to the laptop’s internal Broadcom 802.11b/g adapter. We used Metageek’s free InSSIDer Wi-Fi scanning utility to detect and measure the strength of networks.

We set the notebook on a backyard patio facing a row of single-family homes (constructed entirely of signal-absorbing concrete block) approximately 300 feet away across a pond. While scanning via the notebook’s internal adapter, InSSIDer conistently detected the signal from nine networks other than our own, but only two of them had signals strong enough to allow a reliable, if weak, connection. We then switched to the Wi-Fire adapter, setting it down about a foot from the laptop and pointing it directly at the aforementioned row of houses. When scanning with the Wi-Fire, InSSIDer detected an additional six networks, for a total of fifteen. This time, we could easily connect to any of the original nine networks, as well as four of the six new ones.

Because the Wi-Fire’s antenna is directional rather than omnidirectional, obtaining optimal signal strength for a given network depends a lot on how the device is positioned. It’s much easier to fine tune the Wi-Fire’s positioning when you use the device’s own Connection Manager, since it reports signal strength as a percentage instead of the less precise Excellent/Good/Fair/Poor five bar scale used by Windows’ built-in utility.

It’s worth noting that you can only buy the Wi-Fire direct from hField Technologies or from a handful of relatively obscure resellers-unfortunately, you won’t find it for sale at your local Best Buy or from popular online retailers, such as Amazon, Buy.com, or NewEgg. About the only other complaint we can muster about the Wi-Fire, aside from the lack of 802.11n support, is that it could use some sort of pouch or case to protect the device and keep the adapter and cable together in transit (though both will fit comfortably in a plastic sandwich bag).

Even with its new lower price tag, the Wi-Fire costs anywhere from 50% to 100% more than most other USB-based 802.11b/g adapters, but that premium is well worth it given the Wi-Fire’s demonstrated ability make a richer stew out of thin Wi-Fi gruel. When you’re out hunting elusive Wi-Fi signals, the Wi-Fire is a “bigger boat” that will serve you well.