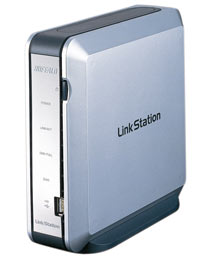 Buffalo Technology’s 300GB LinkStation Multimedia Home Server is a great example of a new class of products that brings enterprise-style network attached storage (NAS) to the small business and home market. NAS servers like the LinkStation unit are basically stand-alone external hard drives that you access over a local area network. This product supports network access speeds up to 1 gigabit per second (Gbps) — assuming you have a Gigabit Ethernet router and workstations attached via Gigabit Ethernet adapters.

My experience with the LinkStation server was generally good, although I did encounter one fairly minor and not necessarily repeatable problem. Getting in touch with a Buffalo technical support agent, however, required waits of 15 minutes and more. Not a good sign.

Backup and Beyond
Small businesses and consumers can use NAS in one or both of two ways. They can deploy it as a safe and easy-to-use backup solution. All users back up their workstation hard drives to the NAS server. Or they can use it to simplify file sharing among a group of workers or devices, storing data on the server and making it accessible to all users or devices on the network. LinkStation also lets you protect data by restricting access with group and user level security.

The 300GB LinkStation is part of Buffalo’s HS-DGL Series, which also includes a 400GB model. They’re designed primarily for home users, but at $400 and $550, they’re also cost-effective solutions for small companies. The capacity may sound like a lot, and for many small businesses it is, but Buffalo and others are now offering small-business NAS servers with terabyte (a thousand gigabytes) and higher capacity for $800 and up.

You can add more storage to your LinkStation-based NAS system by plugging a USB hard drive into one of two USB ports on the server, one at the front, the other at the back of the unit. If you’re using the LinkStation primarily for shared storage, you can back up the shared data to the USB drive. The product comes with built-in backup software for this purpose. Or you could buy a second LinkStation and back up one to the other over the network. This provides the added security of letting you put the backup drive in a different room.

The second USB port can be used to plug in a shared printer. You can always share a printer attached to a workstation over the network, but it can mean degraded performance on the host workstation when somebody else on the network is printing a big job. The LinkStation eliminates that. The product includes built-in print sharing capabilities that worked well.

If you want to use the LinkStation primarily to back up computer hard drives, Buffalo provides the basic Memeo backup utility from Tanagra, which you can download to workstations and use to schedule automatic backups every day, week or month. It is a very simple program. It doesn’t allow incremental backups that only copy new files or files that have changed — it copies all files every time it backs up, which can tie up computing resources if there are a lot of files in the source folders.

However, you can also map a “share” — a named repository on the LinkStation — to a drive letter on a PC and then use any backup software to back up to that drive.

If you’re using the LinkStation mainly to do scheduled backups, you could use the unit’s Disk Sleep function to save power. Using the setup utility, you can set a time to put the LinkStation to sleep and a time to wake it up — so the server is awake only at times when backups are scheduled.

Plug It in and Go
The LinkStation was easy to set up. You plug it into a network, turn it on and it connects. It doesn’t matter whether you use a cross-over or straight-through Ethernet cable — the unit will automatically configure itself for whichever cable it finds. Then you install the supplied utility software on a PC connected to the same network and adjust basic settings such as network SSID, IP address, subnet mask, gateway, and date and time. The setup utility is then accessible from a browser by entering the LinkStation’s IP address, usually automatically assigned by your network router’s DHCP server.

Setting up new shares, groups and users and establishing security for them is also a relatively simple matter using the browser interface. The first step is setting up user names for each person who will be accessing the server, with passwords for each if needed.

If you want to set up a share to hold documents and data that will be accessible only to the management group, for example, start by setting up a user group in the Security section of the LinkStation utility. You do this by clicking radio buttons beside the user names of people you want to include in the group. Next create a share and choose to enable Access Restriction. Then give only the management group permission to access the share and nobody else. When group members try to access the share, they have to enter a valid username and password in a standard Windows dialog.

The LinkStation products also offer a couple of nice features that will be primarily of interest to consumers, but could be useful for businesses as well. If your digital camera is one that emulates a hard drive when plugged into a host PC or Mac USB port, you can plug it into the LinkStation server and download files to the drive automatically. Theoretically. My Nikon D50, which appears as a hard drive when plugged into my PC, was not recognized by and would not mount on the LinkStation.

The interface for this function is also a little scary. You plug the camera in and watch for the power LED on the front of the LinkStation to blink while the camera is mounting. (This didn’t happen when I plugged in the D50.) Then the manual instructs you to “quickly” press the power button twice. There are also warnings about not disconnecting the camera while pictures are downloading for fear of damaging either camera or LinkStation. This does not engender great confidence in the process.

The LinkStation will function as a music server to any digital media player that complies with DLNA (Digital Living Network Alliance) protocols, including Buffalo’s LinkTheater products ($100 and $300). Media players are devices, often wireless, that plug into a home entertainment system and receive digital audio and video files streamed over the local network from a server, usually a PC. They convert the digital data stream to an analog signal and pass it to the entertainment system. Storing your digital media on the LinkStation rather than a PC and using the LinkStation’s PCast features means you can play music or videos even when your computers are turned off.

DLNA compliance ensures that media receivers and servers interact in standard ways. DLNA certification is a fairly new phenomenon, however, and there are few DLNA-compliant devices on the market yet.

Bottom Line: With the single exception of the camera connection, the LinkStation performed well in our tests. It’s a solid, economical product that would serve well either for sharing files around a small office or at home, or for backing up PCs over a network. If you’re going to use it for backing up workstation hard drives, it’s probably better to configure it so you can use a more full-featured backup program rather than the very basic one Buffalo ships with the product.

Gerry Blackwell is a regular contributor to PracticallyNetworked.com