Microsoft’s Windows Home Server (WHS) has been slowly but steadily gaining in popularity since its debut back in late 2007, and in that time has managed to establish itself as a credible alternative to garden-variety consumer NAS devices for those looking for centralized home storage that’s comprehensive and customizable, yet still user-friendly.

After a trio of “Power Pack” updates to the original over the past couple of years, a major overhaul of WHS is now on deck. Microsoft recently released a public beta of its Windows Home Server v2, code named “Vail”, so we took it for a test drive to see some of what’s in store.

Unlike today’s Windows Home Server — which is essentially Windows Server 2003 under the hood — Vail is based on the current Windows Server 2008 R2, which happens to be a 64-bit-only operating system. As such, Vail requires a 64-bit CPU (of 1.4 GHz or greater), with 1 GB of RAM and a 160 GB hard disk rounding out the minimum hardware requirements. We had no trouble getting Vail up and running on a 4+ year-old Dell desktop PC with a 2.8 GHz Pentium 4 and 1 GB/250 GB using the standard DVD setup wizard, which has been simplified to require minimal user input. For a truly unattended install (necessary for “headless” servers that lack a display or input devices) you can pre-configure an answer file to be read off a USB flash drive.

Another notable enhancement to the initial setup process is that if the lack of an appropriate driver prevents the server’s Ethernet from firing up, Vail notifies you so you can install the driver manually. In the current WHS, the first indication of this fairly common problem is usually the server’s failure to appear on the network. (Incidentally, the Vail server logon screen advertises itself as Windows Home Server Premium, strongly implying that come launch time, there will be multiple WHS flavors on offer.)

As with the current WHS, one the server OS installation is complete, additional setup and administrative chores are performed from a remote PC. You can have up to 10 clients (Windows 7, Vista, or XP) and set them up with the WHS Connector software either via a Web browser (new to Vail) or from DVD.

Vail’s Dashboard utility takes the place of WHS v1’s Console and handles user, computer, and storage management, as well as the configuration of ancillary features like media streaming and remote access. Vail cites a strong password requirement — at least 8 characters composed of letters, numbers, and symbols — for all user accounts, but at least in this beta, it isn’t actually enforced. By contrast, WHS v1, only requires password complexity for accounts that receive remote access rights. 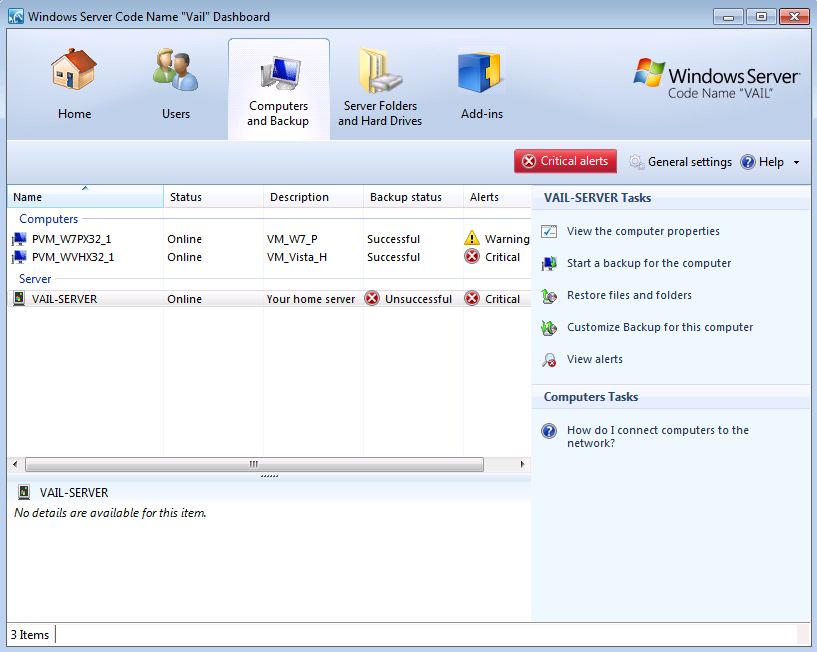 New to Vail is a Launchpad app that displays server and PC alerts and provides a shortcuts to four commonly used items — PC backup settings, remote (i.e. browser-based) access, the aforementioned Dashboard, and the gang of Shared Folders — Users, Documents, Pictures, Music, Video, and Recorded TV, plus any additional folders you set up. A new Windows Home Server SDK (which was released shortly after this beta) will allow developers to extend both the Launchpad and Dashboard with additional items. 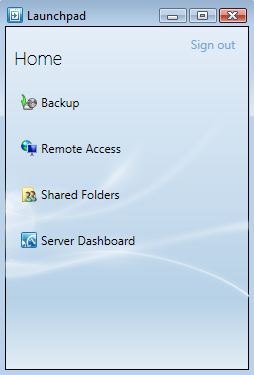 On the subject of Recorded TV, Vail doesn’t include a much sought after feature — namely, an integrated Windows Media Center that would allow the server to host a TV tuner card and serve as a centralized DVR. It does, on the other hand, add native DLNA media streaming (which requires a third-party add-in with WHS v1) and unlike v1, Vail can participate in Windows 7 Homegroups.

Vail gains some important new capabilities when it comes to storage management and backups. Drives larger than 2 TB are supported for the first time, and the familiar Folder Duplication feature, which creates a redundant copy of individual data folders on a separate server hard drive, now operates in real time instead of at scheduled intervals. You can also opt to remove the server’s primary hard drive from the storage pool so that it will contain only the server OS and configuration, not any user data.

The inability to backup that server OS and configuration is one of WHS v1’s major weaknesses, as is the lack of any way to allow duplicated folders and PC backups to themselves be backed up to removable storage for safekeeping offline or offsite. Happily, Vail addresses all of these issues with a comprehensive server backup feature that backs up the whole shebang to a designated external drive.

Vail makes big strides when it comes to remote access. For starters, setting it up is all but effortless if you have a UPnP-capable router, but more impressive was the fact that detected and punched through our double NAT situation, so that no manual port forwarding was needed in order to reach the server from the Internet. Also, you have the option to use your own custom domain name in lieu of the standard yourserver.homeserver.com. 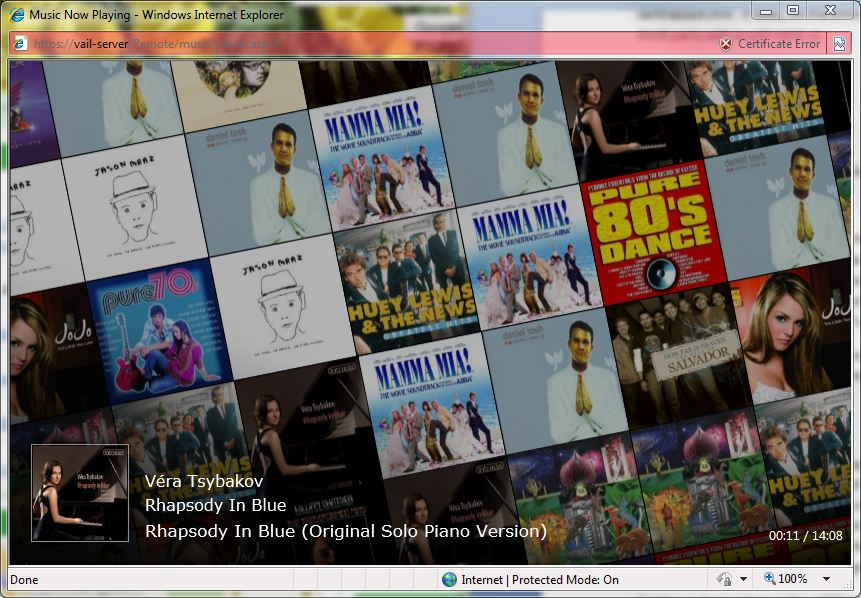 Vail’s new remote landing page — which looks a lot like Windows Live — is fairly customizable; you can change both the background image and logo, add a list of links to favorite sites, and rearrange components by dragging them around the page. (Additional customization options for remote access pages will be provided by OEMs.)

But the real news here is the addition of remote streaming — instead of simply being able to browse and download files, you can now play video, audio, and photo slideshows via slick-looking Silverlight-based apps. While streaming audio, for example, an animated background of album art with live links provides convenient access to other content. In the case of video, content is transcoded in real time if necessary and the bitrate automatically adjusts based on available bandwidth.

Given its beta status, almost everything about Vail is subject to change — features may yet be added or removed, and many of the existing features aren’t fully implemented. But based on this early look, the next version of WHS is set to deliver some significant improvements over its predecessor. Microsoft hasn’t committed to a release date yet, though it’s probably a safe bet that it will launch some time before the end of the year. If you want to check out Vail for yourself, you can download the beta at Microsoft’s Connect Web site.