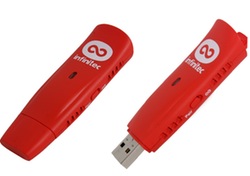 Although networks are available pretty much everywhere these days, good old-fashioned Sneakernet remains a popular choice for transporting files (especially large ones) between computers. Infinitec’s Infinite Memory Drive (IUM) offers a new twist on an old standby–a USB storage device that promises almost limitless capacity despite the fact that it contains no appreciable onboard storage of its own.

How is this possible? While the IUM looks like a conventional flash memory drive, it’s actually a Wi-Fi (802.11b/g/n, 2.4 GHz) adapter that presents itself as a flash drive to the devices you plug it into. By linking the IUM to a Wi-Fi-equipped host computer, you can share anything on that computer and have it appear as if it were stored locally on the IUM–hence, infinite storage.

When you consider the breadth of devices that can use standard USB flash drives–not just computers, but televisions, game consoles, set-top boxes, digital photo frames, etc.–you can really start to see the IUM’s potential. Unfortunately, that potential is somewhat marred by its erratic operation.

The $129 IUM certainly doesn’t look like an ordinary USB drive–it’s clad in a soft-touch plastic similar to the kind frequently used on smartphones, and its eye-catching red color isn’t far off from that of biomedical waste container from a doctor’s office. There’s a three-color status LED right on the IUM’s face, plus a side toggle that switches between the unit’s two modes–Pair and Infinite. A minor quibble–the IUM uses a removable (read: easily lost) cap in lieu of a retractable USB connector.

To get the IUM up and running, you must “pair” it to the host system (Windows 7, Vista, or XP only) that has the content you want to share by flipping the IUM’s toggle switch to “pair” before inserting it into a USB port. The modicum of real storage the IUM provides–256 MB–contains the Infinite Portal software you need to install on the host (the software uses Adobe Air, which is installed for you if you don’t have it).

After installing Infinite Portal, a wizard prompts you to set up a Wi-Fi network that will link the host and IUM. It doesn’t matter if you already have a wireless network in place; you have to create a new one exclusively for IUM to use, and you can secure it with WPA, WPA2, or WEP. Since Infinite Portal commandeers the host system’s Wi-Fi adapter to do so, it means 1) the host system must have one (so wired systems need not apply), and 2) while the IUM and host are linked, the latter isn’t connected to your Wi-Fi network–and thus loses its Internet access connection. Although enabling Infinite Portal’s “Dual-WiFi” mode is meant to let you connect the host system to the IUM and your existing network simultaneously (evidently by bridging through the IUM), we didn’t have any luck getting it to work.

Sharing files or folders with the IUM is accomplished by dragging and dropping them onto the Internet Portal window or right-clicking an item for a context menu option. Before sharing anything, you can “optimize” the IUM for various devices such as a PC, TV or DVD player, PS3, Xbox 360, printer, etc., which determines how big it will appear to the device you plug it into. The size can range from 2 to 256 GB depending on which option you choose, and there’s an option to specify a custom size as well. If you change this setting after sharing files, you have to share them again.

After sharing files through Infinite Portal, it’s time to unplug the IUM from the host, flip the switch to Infinite, and plug it in wherever you want to use it, and this is when things got a bit dicey. When we popped the IUM into another PC, we were struck by how much time the device needed to come online. Case in point: After plugging it into the USB port, it took more than 30 seconds before the IUM showed any signs of life and began flashing its status LED, and it was several minutes more before that LED turned from blinking red to solid green, implying a successful connection to the Infinite Portal. At this point, however, the IUM’s drive letter still didn’t appear in Windows Explorer: That took about another minute.

Once the drive was finally visible, all the content we had shared was there for the taking; we were able to open files, view photos, stream music, and even video. The Infinite Portal software reports the throughput its achieving to the IUM, we saw as high as 33 Mbps, which was enough to smoothly play HD video (albeit at 720p–a 1080p clip we tried didn’t fare well). A particularly nice feature is the IUM’s Upload folder, the size of which can be customized along with the IUM’s apparent size–whatever you put there is copied back to a designated folder on the host computer.

The first couple of times we used the IUM it worked without incident, but most subsequent attempts to connect to PCs or other devices were marred by a cavalcade of different problems, including glacially slow performance when browsing folders, a sudden and inexplicable loss of connection, and a failure to obtain a connection in the first place (the unit would blink red indefinitely). On at least one occasion the IUM seemed to be working, but any attempt to access files would be met with error messages citing possible corruption.

Unfortunately, when the IUM experiences such a failure the Infinite Portal software is of little help as it doesn’t offer any indication as to what the problem might be. Moreover, the printed and online documentation detail how the unit is supposed to work, but offer no real troubleshooting information for when things don’t work as expected. Few technology products work flawlessly each and every time you use them, but our IUM worked as expected only about half the time, which isn’t enough for something that costs well north of $100.

Because the IUM is currently available only from Infinitec’s Web site, buying one will set you back the full MSRP, plus $10 shipping from Dubai where the company is based. Infinitec says resellers have signed on and will begin shipping the product early in 2011.

Infinitec’s Infinite USB Memory Drive is an ambitious and innovative product that delivers what it promises when it works. But it’s not quite reliable or consistent enough for prime time; hopefully this can be achieved with future software updates. We were hoping the IUM would give Sneakernet the winged sandals of Mercury, but for the moment can just as easily be described as a pair of clodhoppers.

Joseph Moran is a longtime technology writer and co-author of Getting StartED with Windows 7 from Friends of Ed.