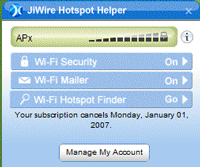 JiWire’s Hotspot Helper (a revamped version of the utility previously known as SpotLock) is designed to make it easier to find and use hotspots and to enhance your security while you do. The software (which is currently available only for Windows XP) is made up of three components: Hotspot Finder, a comprehensive hotspot database you can use offline; Wi-Fi Security, a wireless VPN; and Wi-Fi Mailer, to get around outgoing e-mail restrictions sometimes encountered at hotspots.

Hotspot Finder
These days, it seems like there’s a Wi-Fi hotspot around every corner, but paradoxically, it’s not always easy to find one when you need it. After all, an Internet connection is the most convenient way to locate a hotspot, but if you were online, you wouldn’t be looking for one in the first place.

Hotspot Helper addresses this dilemma with a useful Hotspot Finder — a hotspot database based on JiWire’s extensive online directory. Installing the software places the complete database on your notebook, so it’s available even when you’re offline (though a Net connection helpfully lets you pinpoint hotspots on a map). JiWire says the database, which is updated approximately once a week, contains info on 120,000 verified hotspots worldwide. (You can configure Hotspot Finder to periodically download the latest version of the database and to only pull down information for the geographic areas you specify.)

You can search the Hotspot Finder database in a variety of ways, including by country, city and state, ZIP code or access provider, and specify whether you want results to include pay hotspots, free ones or both. We used the database to locate several dozen hotspots in and around Naples, Florida and did notice one mildly annoying characteristic: you can only define a search radius when you search by city and state. If you search by ZIP code, you can only find hotspots within that specific ZIP code, not any others that may be nearby.

Wi-Fi Security
Once you’ve found a hotspot, Hotspot Helper’s Wi-Fi Security feature gives you an easy way to isolate your system from others while you’re connected to it: Whenever you access a wireless network, Hotspot Helper initiates a VPN connection with a JiWire server.

Hotspot Helper’s VPN uses IPSec and encrypts data using a 128-bit AES key, but unlike many VPNs, it doesn’t require you to enter login credentials or arcane network parameters for access. The whole connection process is automatic and takes anywhere from 10 to 30 seconds. Once it’s enabled, all inbound and outbound traffic on your system travels through an encrypted tunnel, which prevents other wireless clients from eavesdropping on your transmissions or accessing your system via the wireless link. (Hotspot Helper’s tray icon displays a lock icon when the VPN is enabled.) Indeed, we couldn’t ping or otherwise access our wireless notebook from another computer while the VPN was on.

It’s not uncommon for VPN connections to slow down network performance, and that’s certainly not out of the question with the Hotspot Helper VPN, depending on how busy JiWire’s servers are — but we didn’t experience any noticeable performance impact while using it.

From a safety perspective, it’s good that the Hotspot Helper VPN activates whenever you connect to a WLAN, but that can also lead to an inconvenient side effect. While the VPN is enabled, all wireless traffic is redirected through the secure VPN tunnel, which prevents you from accessing any resources on the local network like shared folders or printers. That’s not an issue while online at a hotspot, but it can be a problem once you’re connected to your own WLAN at home or in the office. For those situations, you can disable Wi-Fi security easily enough via the tray icon, but Hotspot Helper should instead support profiles so you could specify trusted WLANs where the VPN would remain off. JiWire says it’s planning to add profiles for a future version, but for the moment, the only option (both inconvenient and dangerous) is to prevent Wi-Fi Security from starting up automatically on any wireless network and then manually turning it on at a hotspot.

Wi-Fi Mailer
Sometimes it proves impossible to send e-mail when connected to a hotspot, usually because the operator is blocking outgoing mail due to spam concerns. You may also be prevented from sending mail when using an ISP-hosted e-mail account, because some ISP mail servers won’t accept mail that doesn’t originate from the provider’s own network.

While you can avoid these kinds of issues by using a Web-based e-mail service like Gmail or Yahoo! Mail, that’s not a very convenient option for people who rely on a conventional e-mail application like Outlook or Thunderbird. A better way to circumvent hotspot-related e-mail restrictions is to use Hotspot Helper’s Wi-Fi Mailer, which detects outgoing messages from the mail client and forwards them through an SMTP relay operated by JiWire. Citing the aforementioned spam concerns, Wi-Fi Mailer limits you to 200 outgoing messages a day, but since an e-mail to multiple recipients only counts as one message, those without nefarious aims shouldn’t be impacted by the cap.

We couldn’t locate an e-mail blocking hotspot and we don’t use ISP-based e-mail, so we tried to simulate that scenario by blocking port 25 (used by SMTP) on my Wi-Fi router. That naturally prevented any outgoing mail from leaving the network. Once we turned on Wi-Fi Mailer, the messages quickly got through and arrived at their destination without a hitch.

Bottom Line
Hotspot Helper is available for download with a 10-day unlimited use trial period. After that, you’ll need to fork over $24.95 for a year of unlimited use, which we’d consider a bargain considering the product’s capabilities. (Hotspot Helper’s SpotLock predecessor cost about twice as much.) Even if you don’t pony up for the registration fee, you can still continue to use the Hotspot Finder feature free of charge and use the VPN for up to an hour per day. For people who spend a limited amount of time traveling, that’s certainly better than no security at all.

While other VPN services abound, and one is completely free (AnchorFree’s Hotspot Shield), you won’t find any with the mix of directory, security and e-mail workaround that JiWire offers. If you spend a lot of time at hotspots, Hotspot Helper is almost a no-brainer and should be on your shopping list.