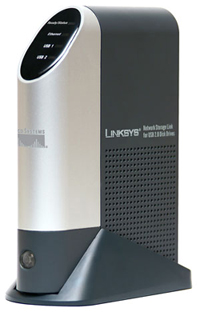 Network-attached storage (NAS) devices are a good way to add storage to a network without the costs and hassles of upgrading (or buying) a general-purpose server. But while NAS devices can be considerably cheaper than such servers, they can still be relatively pricey for a small business, easy to outgrow and difficult or impossible to upgrade.

The $99 Linksys NSLU2 Network Storage Link offers an alternative to traditional NAS — you can consider the unit to essentially be a NAS device without the built-in hard drives. In lieu of fixed internal storage capacity, you can connect up two USB hard disk drives to the NSLU2 and share access to them over a network. Teamed with one or two USB drives, the NSLU2 is a very inexpensive way to serve up large amounts of network storage capacity. Unfortunately, a badly designed interface and other problems mar the overall usability and value of the product.

The NSLU2 has very small dimensions — the unit is actually less than half the size of the typical USB hard drive — and the device can be used in a horizontal orientation or vertically (with the included stand). The rear of the unit sports a 100 Mbps LAN port and two USB ports, both of which can accommodate USB 2.0 or 1.1 hard drives. (Linksys says the NSLU2 currently supports up to 250MB drives, with larger drives to be supported in future firmware updates.) You can also plug a USB Flash drive can be plugged into NSLU2 (the second USB port only).

Linksys includes a setup utility with the NSLU2 that didn’t have any difficulty locating the device even though its default IP settings were different than my network settings. The NSLU2 automatically obtains an address from a DHCP server, but it’s always preferable to use a static address or at least a reserved DHCP address so you can locate the device easily locatable for administration purposes.

In order to use a disk with the NSLU2 (I tested with two USB 2.0 hard drives from different vendors — an Iomega 80GB unit and a Maxtor 40GB drive), you must first format it with the device’s built-in formatting tool. The NSLU2’s file system is not Windows-compatible, so once you format a drive, you can no longer access it directly by connecting it to a Windows PC via the USB port. Furthermore, if you’re planning to use an external drive that already has data on it, be sure to off-load the files to your PC — otherwise you’ll lose the data during the formatting process.

Also, once you connect a USB drive to the NSLU2 you may as well consider it to be internal. Disk drives are not hot swappable, so you must first power down the unit before connecting or disconnecting one.

Since you can’t use Windows-based disk utilities on NSLU2-connected hard drives, the device comes with its own scandisk function. It doesn’t include a disk defrag option, however, and that could degrade performance since fragmentation inevitably occurs over time.

The NSLU2 displays any shared folders you create in the Windows Network Neighborhood, provided the unit is set to be a member of the same workgroup. You can also specify a WINS server if you want shares to be accessible on other network segments. Because of the overhead introduced by the network and the device itself, a USB drive connected to the NSLU2 isn’t as fast as if it were connected directly to a PC. I noticed a slight but perceptible delay in certain operations — saving files took a bit longer than normal, and it took a few additional seconds to open folders.

As mentioned previously, you can use one of the NSLU2’s USB ports to provide access to a USB Flash drive. Linksys includes a special utility that detects when a Flash drive is inserted and pops up a dialog box letting you map the device to a drive letter. (It does this on every PC running the utility simultaneously, which might be somewhat annoying for people who don’t need access to the drive.)

The utility also provides a safe removal function to ensure delayed writes are performed before the drive is removed. Technically, you don’t need the utility to access an NSLU2-connected Flash drive, but given the aforementioned feature it’s probably preferable to use it.

The NSLU2’s haphazardly designed and frustrating user interface is a major drawback. The overall layout of the administration pages is extremely confusing, and related functions that should be grouped together often aren’t, making them hard to locate quickly.

You can control the access to disk storage by setting up user accounts with three levels of access rights: read only, read/write and no access. You can also create a private folder for each NSLU2 user account. The NSLU2 lets you define how much disk space each person can use, but unfortunately there’s no way to check how much of a user’s storage allotment has been consumed — you find out that you’re over only when the attempt to save a file fails.

For monitoring the status of the device, the NSLU2 maintains a very basic log that you can only access directly through the unit. Theoretically, you can configure the NSLU2 to send an e-mail alert in the event of a device problem or if disk space runs low, but there’s no indication either in the device interface or the documentation of what specific events or thresholds generate an alert. Moreover, there’s no test button for this feature, so I couldn’t get the NSLU2 to actually send an e-mail.

In addition to browser-based administration, the NSLU2 lets you access the data drives (albeit in read-only mode) directly via a browser. This makes it possible to provide remote access to data by making the NSLU2 accessible over the Internet via simple firewall port forwarding, but doing so would be a very bad idea for a number of reasons.

One reason is that logging in to the device from the Internet means sending personal information — your username and password — over a non-secured pathway — a big no-no. Moreover, administrative and data access to the NSLU2 aren’t separate (you do both from the same page). Therefore, you can’t remotely administer the NSLU2 without exposing the data to potential Internet threats as well.

Another big problem: you can actually change any user’s password (provided you know the username) without having to log into the NSLU2 as an administrator. And while you can modify the port you use for browser-based access to the NSLU2, you can’t disable browser access since that would preclude administration of the device.

The NSLU2 has a built-in backup utility that backs up shared folders on the device to a location on a networked PC, or conversely, to back up PC-based shares to the NSLU2. Unfortunately, the unit’s interface again proves a hindrance in this regard. Entering the correct format for backup source and destination paths is an exercise in frustration, and the online help and documentation don’t do much to clarify things.

Even more troublesome is the fact that the only way to determine whether a backup actually occurred is to manually check the log. You can configure the NSLU2 to backup the entire contents of its own disk one to disk two (assuming the latter exists, of course). Thankfully, this type of backup worked without any problems.

You can schedule any backup job can be scheduled (and other tasks like disk scans and unit shutdown or restarts). Scheduling flexibility is limited though— you can schedule a task to execute on a particular day and time of the week or every day, but you can’t schedule tasks to occur only on weekdays, for example.

When using the NSLU2 as the destination for any type of backup, it’s important to remember that since an attached disk drive is useless without the NSLU2, a true disaster recovery scenario will necessarily involve a spare NSLU2 unit to ensure a restore is possible.

The NSLU2’s low cost combined with the ability to use low-cost external storage is a reason to consider buying it, and there’s little doubt that an NSLU2 paired with a couple of low-cost, high-capacity USB drives will be less expensive and more flexible than most NAS devices. On the other hand, the NSLU2’s confusing software interface and lack of defrag capability exacts a significant price on time, patience and piece of mind.

Most of what’s wrong with the NSLU2 could be fixed with an overhaul of the device’s firmware and administrative console, and hopefully this is a project Linksys has already begun. If you’re looking for lots of network storage and the lowest possible price, the NSLU2 may be satisfactory, but most people will be better served by waiting until such time as the NSLU2 gets improved software.