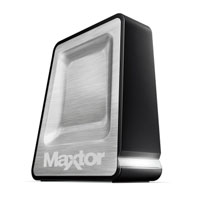 External storage devices used to be little more than internal hard drives slapped into nondescript cases. These days it seems that each new generation of external storage is more functional and more stylish than the last. They’re increasingly packed with host of convenience and security features that go well beyond basic storage. The Maxtor OneTouch 4 Plus is the latest example of this. It’s a sleek external storage device that includes utilities not just for backing up and restoring data, but for synchronizing and encrypting it as well.

The OneTouch 4 Plus is a wedge-shaped (vaguely rectangular, but with only two right angles), vertical-standing device. Recessed brushed aluminum inserts cover the broad sides of the drive, while a white status light near the base doubles as the customizable OneTouch backup button. The OneTouch 4 Plus connects to either a PC or Mac via USB 2.0 or FireWire 400 (you get a pair of ports for the latter, and the drive includes cables for each interface type. We appreciate a choice of interfaces, but we’d prefer an eSATA port as well (which is available on one of the OneTouch 4 Plus’s distant relatives, the Seagate FreeAgent Pro).

The drive comes pre-loaded with a utility called Maxtor Manager, which controls all the drive’s configuration options and advanced features. You install it right from the drive rather than from a CD, and in fact that’s your only option (other than downloading the software from Maxtor’s Web site), since the software’s not on the CD. This can sometimes cause a problem, as we’ll see in a moment.

Backup/Restore
Because external drives like the OneTouch 4 Plus are very often used as repositories for personal data backup, Maxtor Manager naturally provides an integrated backup function. With one click, it will let you perform a simple backup of the My Documents folder (or Personal Folder in Vista) every night at 10:00 p.m. You can also create a custom backup job to specify an automatic backup schedule, as well as decide on the particular folders and/or file types you want to safeguard.

If you want to backup an entire system — not just data, but all configuration data plus operating system and application files, too — you can do that with the OneTouch 4 Plus’s SafetyDrill feature. While somewhat strangely named, it’s an easy-to-use disaster-recovery tool that enables a so-called bare metal restore to a computer’s empty hard drive directly from an specialized boot CD, which is included with the drive.

Alas, SafetyDrill only works with Windows XP/Vista, and it isn’t as quite as convenient as some other disaster-recovery utilities because it doesn’t support the automatic creation of drive images or allow for images to be regularly updated as your drive’s contents change. Instead, you must create your SafetyDrill drive images manually (you can configure Maxtor Manager to remind you to do so every x number of days). While the OneTouch 4 Plus’s OneTouch button can be configured to launch a backup job or the application of your choice when pressed, there’s no way to make it create a SafetyDrill copy.

You can save multiple SafetyDrill images on the OneTouch 4 Plus, as well as limit the amount of drive capacity dedicated to their storage. Each saved image will contain multiple partitions if there were several on your PC’s internal drive.

The presence of a ready-made SafetyDrill recovery CD with the One Touch 4 saves you the extra step of having to burn your own via a utility, but on the flip side this makes it pretty important that you not lose the disc. Therefore, making a backup copy is highly advisable, but you can also download an .ISO image of the disk from the Maxtor support site.

In spite of some limitations, SafetyDrill is a useful feature (disaster recovery is one we’ve long waited to have included with a Maxtor OneTouch drive), and we had no problems booting and restoring two systems with it.

Security
With any easily portable device that’s subject to loss or theft, data security can be a major concern. Thankfully, the OneTouch 4 Plus offers a couple of methods to keep your sensitive information safe from prying eyes.

The first level of data protection is DrivePass (known as DriveLock on earlier Maxtor products), which lets you restrict access to the drive by securing it with a password. Once you password-protect the drive, it locks itself when it powers down and prompts you for the password when you bring it back online.

Encryption on the OneTouch 4 is handy but could also be a bit more convenient, because opening up the encryption window requires a foray into Maxtor Manager.  Luckily, since a separate application handles the encryption, you can save a few mouse clicks by placing a shortcut to that program onto the desktop for quicker access. (Manually placing files into the encrypted folder on the drive doesn’t encrypt them — it only works when you drop files on the application window.)

To gain access to a DrivePass-protected OneTouch 4 Plus or any encrypted data on it, the system the drive is connected to must have the Maxtor Manager software installed. Therefore, before locking the drive or encrypting any data, it pays to install Maxtor Manager in advance on any system you plan to use regularly with the OneTouch 4 Plus. (Although plugging the OneTouch 4 into a computer without Maxtor Manager will produce an offer to launch the encryption software directly, selecting that option promptly results in an error message.)

Data Synchronization
Using the OneTouch 4 Plus’s sync feature, you can synchronize files and folders from the system to the drive, and then in turn use the drive to transfer the synchronized data to other systems (to keep data synchronized between a desktop and a notebook, for example).

Like the backup feature, the sync feature has simple and custom options. The former will automatically sync the entire contents of the My Documents or Personal folder, while the custom option lets you include or exclude locations or file types, sync automatically or manually and apply encryption to any synchronized data on the drive. The sync feature doesn’t work across operating systems, so you can’t sync between, say, XP, Vista and Mac  machines.

Although not especially heavy, the OneTouch 4 Plus will be a bit much for most people to lug around as a synchronization device. There’s also a smaller and lighter Mini version of the drive that includes all the features of the Plus that comes in 80, 12, and 160 GB capacities (for $100, $120 and $150, respectively).

Maxtor also offers the OneTouch 4 in a less expensive standard model; it’s available in the same capacities as the Plus versions, but lacks the aluminum panels, FireWire ports and the quartet of advanced features — synchronization, drive password-protection, data encryption, and SafetyDrill. Given the modest price premium of the Plus (it’s a mere $20 or $30 depending on capacity), we think it’s well worth the extra cost.

The Maxtor OneTouch 4’s software features could benefit from a little more flexibility; namely, the capability to access a password-protected drive or encrypted folder without having to first install Maxtor Manager, and a way to schedule the creation of SafetyDrill images. While not perfect, the OneTouch 4 Plus is still a solid external storage device that provides the basic tools to keep data safe, secure and synced.