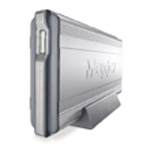 If you need more storage for a home or small business network (and let’s face it, who doesn’t?), you’re a good candidate for a NAS (Network Attached Storage) drive. Maxtor, a company well-known for its USB/FireWire external hard drives, is extending its presence into NAS with its Shared Storage Plus.

The 300 GB Maxtor Shared Storage Plus (200, 400, and 500 GB capacities are also available) looks like the company’s line of drives designed to connect directly to a PC. The main visible difference is the addition of an Ethernet port and the lack of FireWire ports. The SSP has two USB ports, but they’re not there to connect the Shared Storage Plus (SSP) directly to a PC. (For starters, the ports are Type A connectors, the same kind found on PCs and hubs.) Instead, you can use the ports to connect external devices such as a printer or additional hard drives.

Like most NAS devices, the SSP carries a significant premium over conventional storage. At $399, our 300 GB model costs about 25 percent more than Maxtor’s USB/FireWire hard drive of the same capacity.

After you get the SSP physically connected to your network and powered up, it looks for a DHCP server on your network to get an IP address. Once an address has been assigned, you run Maxtor’s configuration utility, which, in turn, launches a browser-based application to further customize the SSP’s configuration — you can create an administrative password, specify a Windows Workgroup name (MSHOME is the default) or override DHCP with static IP settings, if desired. A mildly irksome characteristic of the SSP is that it uses a soft on/off switch, so if the unit loses power, it must be turned on again manually.

Accounts and Folders
After you complete the network configuration, it’s time to create folders. Maxtor’s utility makes this a simple task. You can set up either public folders or private ones that require a username and password to access. Whether a folder is public or private, you’re prompted to specify whether the folder is for home or business use, and based on your answer the utility will create a series of nine “My” sub-folders underneath — My Documents, Movies, Music, Photos and so on. (A slightly different and more work-oriented set of folder labels is supplied for business folders.)

Folders on the SSP are accessible on systems via normal network drive mapping, but don’t worry about the technical details of that because when you set up a folder a shortcut icon is automatically created and placed on the desktop. In addition to the categorical sub-folders mentioned above, this desktop shortcut also includes an embedded shortcut to the SSP’s default Public folder. It’s easy to put stuff in there without having to navigate through Windows Network Places/Neighborhood (though you can access the drive that way).

Housekeeping Help
A unique feature of the SSP is its Drag and Sort, which can help you keep files organized — when you drop files onto the SSD desktop shortcut, each file in turn put into the appropriate sub-folder based on the file type. For example, a .doc or .xls file goes into My Documents, while a JPEG goes into My Photos. (You can decide whether the files will be sorted into the public or a private folder.)

Drag and Sort can be a time-saver and many people will find it useful, but others will probably choose not to use it since it works only within a predefined structure — it recognizes most but not all file types, and you can’t route specific file types to custom folders of your choice. This can sometimes leave you trying to figure out where a particular file went.

Another wrinkle in the desktop folder shortcut concept is that there can be only one such shortcut at a time, so if you create a new public or private folder a new shortcut replaces the previous one. (You can change the desktop shortcut without creating a new account by using the utility to specify an existing rather account instead of a new one.)

Backup and Restore
Recognizing that users may want to use the SSP as a backup device as well as shared data storage, Maxtor’s utility also includes built-in backup software, which can back up systems manually or according to a predefined schedule. Backups are stored in a My Backups sub-folder and you can retain historical versions of files (five versions by default), so you don’t have to worry about last night’s backup being wiped away.

A SimpleView status dialog lists all the backups that have taken place on the SSP and lets you verify whether individual backups were successful or not. Our two test backups did successfully occur, but for some unknown reason they failed to show up within SimpleView.

Administration and Monitoring
The SSP’s browser-based administration console gives you more fine-tuned control over user account and folder configuration (as well as duplicates most of the functions of the utility software, which works only with Windows 2000 or XP). Unfortunately, though, the SSP doesn’t give you the capability to set disk quotas to ensure the equitable use of space.

What’s more, you’ll need a crystal ball to know when the data on the SSP approaches the capacity limit, because there isn’t a way to tell how much space a given folder is using or how much free space is left on the drive. While hundreds of gigabytes is a lot of space, these days it can still get used up in the blink of an eye, especially if multiple people are using a drive. (Although the utility lets you purge surplus backup files from the SSD, the only way to clear space with regular data is to do so manually.)

External Devices
As mentioned above, the SSP offer a pair of USB ports you can use to attach a printer or additional storage devices such as Flash drives or even other hard drives. In practice, though, connecting Flash devices may be problematic since any storage device you connect to the SSP must use the FAT32 file system, and since Flash drives are often formatted with FAT from the factory, this leaves a destructive reformatting as the only option.

On the other hand, piggy-backing additional hard drives off the SSP makes it easy to expand your storage capacity once you start to bump into your SSP’s capacity limit. This approach doesn’t offer some of the benefits of NAS devices that include multiple drives in a single chassis, however. For example, you can’t configure multiple drives together as a performance-boosting RAID 0 stripe set, nor can you back up or mirror the contents of the SSP to an auxiliary drive.

The primary focus of the SSP is on ease-of-use, and in spite of some shortcomings, the product does fulfill that promise. Although it doesn’t have the same level of flexibility or capacity as some competing NAS products, the Maxtor Shared Storage Plus will appeal to anyone who wants NAS storage that’s quick and easy to both set up and use.