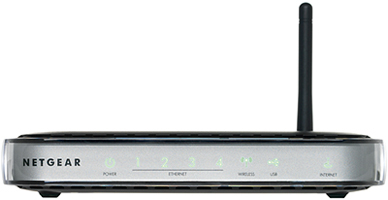 Wi-Fi hotspots are seemingly everywhere these days, but only seemingly, because there are still plenty of places where Wi-Fi isn’t within easy reach. That’s why many people rely on a 3G cellular data connection as a Plan B, but while plugging a 3G modem into your laptop will get you on the Internet, it’s not much use the co-workers, friends, or family you’re travelling with, unless you can manage to share the connection.

That’s where Netgear’s 3G Mobile Mobile Broadband Wireless Router (MBR624GU) comes in. This $110 (MSRP) device will make your 3G modem’s data connection available to others via 802.11 g/b Wi-Fi, essentially letting you set up an impromptu wireless hotspot whenever you need one.

The MBR624GU measures 6.9 x 1.1 x 4.7 and uses Netgear’s familiar rounded-rectangle design with a standard flip-up mast antenna rather than the internal variety that’s increasingly commonplace these days. The MBR624GU isn’t especially large by the standards of a conventional broadband router, but neither is it as compact and travel-friendly as some other 3G wireless routers like those from CradlePoint Technology or the new Verizon MiFi.

Aside from a USB port to plug in your 3G modem, the MBR624GU gives you four LAN ports for connecting PCs. That’s arguably three more than necessary for a device ostensibly intended to deliver wireless rather than wired access, and since there’s no WAN port provided, you don’t have the option to use the MBR624GU with standard DSL/cable modem broadband.

The MBR624GU works with about a dozen EV-DO or UMTS/HSDPA modems from three domestic carriers: AT&T, Sprint, and Verizon. Note that this doesn’t include Alltel, which, though now owned by Verizon, still uses different modem hardware than its parent. (You can view the MBR624GU’s modem compatibility list here.)

Since the MBR624GU lacks a Cardbus or ExpressCard slot, it can’t accommodate card-based modems. Moreover, the router’s USB port only works with stand-alone modems, so you can’t use your 3G phone as a modem with it even if your phone and carrier support such “tethering.” (Netgear says that support for phone tethering is on the horizon.) On the plus side, we appreciate the MBR624GU’s inclusion of a three foot USB extension cable with a weighted base, which lets you position your modem some distance from the router if necessary for optimal signal strength.

We found getting up and running with the MBR624GU quite simple. Within about two minutes of turning on the router (it includes a power button so you switch the unit on or off without unplugging it) it automatically recognized the attached Verizon/Novatel Ovation USB727 modem, used it to establish a connection to Verizon’s 3G network, and began broadcasting its Wi-Fi signal. An indicator light on the front of the MBR624GU makes it easy to see the status of the Internet connection at a glance-it glows green if the modem is linked to its 3G network, red if it’s not.

If your carrier requires a username and password to log on to its data network, you can save the information via the MBR624GU’s administration control panel, which you’ll also need to visit if you want to change any of the router’s default settings (to turn on wireless security, for example). From the browser-based control panel you’ll find most of the same configurable options that are available on a standard consumer-level router, though one feature that’s missing is the ability to do incoming port forwarding (most people likely won’t miss it, however).

The MBR624GU is configurable for native g or mixed b/g mode and supports all typical wireless encryption methods including WPA and WPA2 with a Pre-Shared Key (PSK) or 802.1x authentication. If your wireless clients support, it you can take advantage of simplified connecting with WPS (Wi-Fi Protected Setup), which worked flawlessly when we tried it with a Vista laptop. From the control panel you can enable a wireless isolation feature to ensure that connected systems can reach the Internet but not each other. A button on the side of the MBR624GU conveniently lets you turn off the Wi-Fi radio and still leave the LAN ports active.

For the time being you can only use the MBR624GU within proximity of a wall outlet, as it lacks mobility-enhancing accessories, such as a car power adapter or battery pack. Netgear says the former will be available next month, while the latter should be out by the end of the year.

In our time with the MBR624U, we had no difficulties acquiring a strong Wi-Fi signal from nearly fifty feet away and through multiple walls. An Internet connection test at Speedtest.net reported speeds in excess of 1.5 Mbps downstream and almost 500 kbps upstream, which is the maximum performance the USB727 modem is capable of delivering.

The MGR624GU doesn’t have the compactness or wide modem compatibility of some other 3G routers, but it carries a price tag roughly half that of its competitors, making it one of the least expensive units you can buy. If you can live with the limitations, the MBR624GU should serve you well.

Joseph Moran is a veteran technology journalist and frequent contributor to Wi-Fi Planet. He is based in Florida.