Network Magic is a software application that’s supposed to help the average user set up and manage a network. Even though Windows Vista and 7 are much more network-friendly than previous editions, Network Magic provides a consistent interface across different Windows and Mac versions. Plus it offers additional tools, which are supposed to help the ordinary user connect, secure, share, and troubleshoot with ease. Let’s see if they meet their promises.

Installing and Setting It Up

After downloading the free trial from the Pure Networks website, I ran the setup file and installed it with no problems.

After the installation, a wizard asks you a few questions, such as what personal folders and printers you want to share. Then you can create a password for the computer—new since our last review—which you must input before managing or monitoring with Network Magic. Additionally, you can sign-up for e-mail reports on the computer’s activity. Plus you can configure it to take scheduled pictures of the screen, so you have an idea of what the users are doing—also new since our last review. 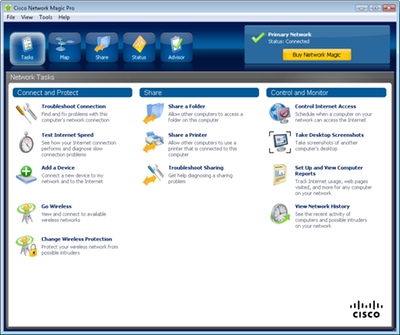 After the install and initial configuration, we wanted to connect to a Wi-Fi network. We found a Go Wireless button on the main Network Magic screen (see Figure 1) and shortcuts on the icon in the system tray. 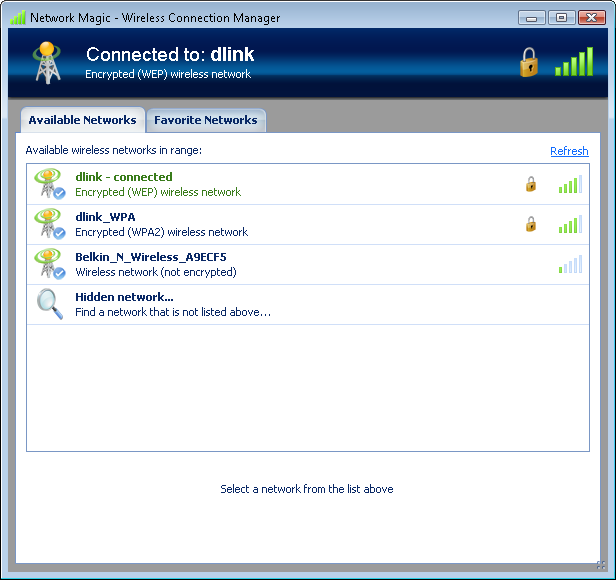 Either way brings you to the Wireless Connection Manger (see Figure 2).

We found accessing and managing the connection settings was straightforward, but there’s room for improvement. For example, to eliminate the amount of clicks, they could the list of detected networks pop-up when clicking on the system tray icon—like in Windows 7.

One potential advantage of using Network Magic over the utilities built into Windows is having extra help troubleshooting network issues. So we wanted to test its troubleshooting abilities. As I’ll explain, we simulated a firewall and protocol misconfiguration to see if Network Magic catches the problems.

First, we went into the Windows Firewall settings on a Vista PC and checked the Block all incoming connections option. This is great when you want to lock down your computer and prevent any access coming in, such as when on public networks. However, if you forget to uncheck the option, sharing won’t work when on your private network either.

Next, we went to another PC that was also loaded with Network Magic and tried to access the share; as planned, it was unsuccessful. So then we clicked the Troubleshoot Sharing button. After it ran a test, it came back said it was likely the remote computer’s firewall causing the problem—exactly what we were hoping for.

Then we wanted to check if it would detect or recommend checking the misconfiguration of the sharing protocols. So we unchecked the sharing protocols on the Properties dialog of the Network Connection. Then from another computer on the network, we tried to access a shared folder on the misconfigured computer; as planned, it wasn’t responding. After we ran the Troubleshoot Sharing wizard, however, it didn’t detect or discuss the problem as we were hoping, and it actually showed the share being accessible when it wasn’t.

There are two new controlling and monitoring features since we reviewed Network Magic 4.8: Internet Access Control and an automatic screen shot utility.

The Internet Access Control feature lets you specify exactly when to allow Internet access on each computer. This is great if you have children in the home. However, if you’re using Windows Vista’s Parental Controls, or a third-party solution, you ought to stick with its scheduling features to centralize your control. 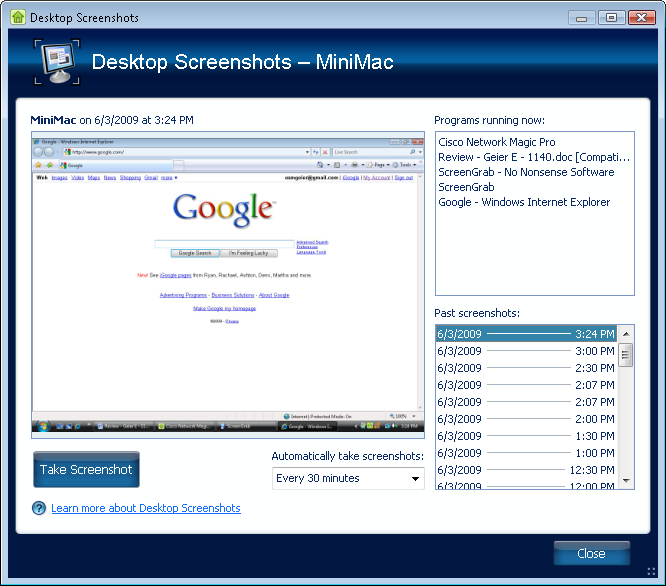 The screen shot utility (see Figure 3) is pretty nifty. You can schedule it to automatically take screen shots every so often or you can manual request a shot. These settings and the shots can be managed and viewed from any computer. This is great if you want to keep your eye on a little one. However, there’s room for improvement. For example, it would be even better if you could view a computer’s screen in real-time, a video stream.

Resource Sharing and the Network Map

If you didn’t share folders or printers during the initial setup of Network Magic, or you want to add more, you can do so at anytime. On the computer that has the folder or printer you want to share, click the Share a Folder or Share a Printer button on the main menu. We found sharing is easy and straightforward, however you can’t specify who you want to give access to; it has to be given to everyone. 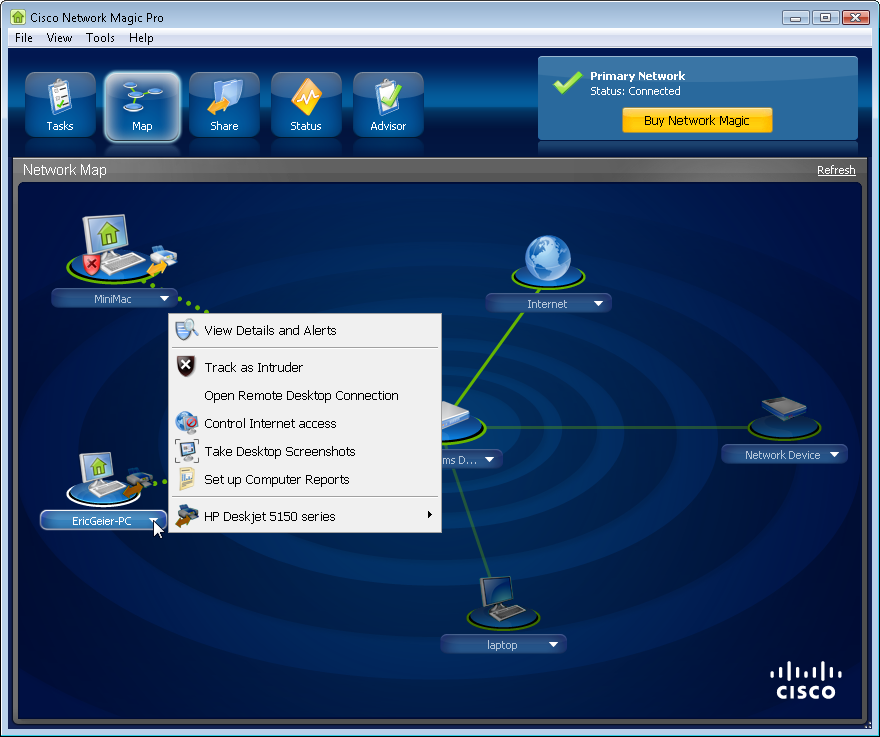 Like back in version 4.8, Network Magic has a Map screen where you can view a simple diagram of your network, which includes computers, Internet, router, and any other network devices. You can click on each component to see what you can do or change. For example, as Figure 4 shows, clicking a computer gives you shortcuts to access its Internet access, screen shot, and report settings. You can even select View Details and Alerts for a detailed summary about the device; great when you need to reference IP or MAC addresses.

Though Network Magic isn’t perfect, it can help average users manage their network easier. Plus it has seen many improvements over the past year, from version 4.8 to 5.5. However, as Microsoft keeps improving the network utilities built into Windows, it seems that the need for third-party utilities will decrease.

Take Network Magic on your own test drive; download a 7-day free trial.