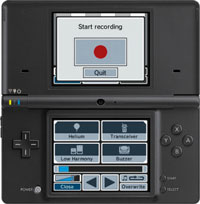 When Nintendo first debuted its DS handheld game console back in 2004, its dual screens — one of them touch-enabled — were arguably a revolutionary feature. While the third and latest iteration of the DS, the $169.99 DSi, doesn’t stray too far from the original concept, it packs in a lot more capability than its predecessor, the compact DS Lite.

The 7.5 ounce DSi has the same basic footprint as the DS Lite — at 5.4 x 3 x .7 inches (W x D x H), the former is a tick longer, but also slightly thinner when closed. Available in either black or blue, the DSi has a matte finish rather than the glossy one of the Lite, and one that is more prone to showing scuff marks or picking up detritus during handling.

When you open the DSi’s clamshell, you’re greeted by twin 3.25-inch screens (up from 3-inchers on the Lite) flanked by a D-pad and button controls. As before, a built-in stylus can be used to manipulate the lower, touch-enabled screen. New to the DSi are a pair of integrated 0.3 megapixel cameras; one facing the user (and mounted in the hinge) and another in the upper corner of the top lid facing out towards the world.

The DSi will run most existing DS titles (as well as future “DSi-enhanced” software), but the Game Boy Advance slot found on earlier DS models has been jettisoned. The DSi includes 256 MB of internal storage which you can supplement with SD/SDHC cards to store game data and/or things like photos and audio.

Getting the DSi online via its built-in Wi-Fi can be somewhat cumbersome, as it requires a fair amount of spelunking down in the settings menu. Awkwardly, the configuration option labeled “Wireless Communications” merely turns the Wi-Fi radio on or off; to actually find networks and configure connection settings you need to delve a couple of layers deeper to “Internet.”

Once you make your way to the proper place in the configuration menus, there are three connection profiles you can configure with the particulars for different networks, but they only permit connections to unsecured or WEP-protected networks (apparently in order to maintain compatibility with previous DS models).

Choosing the advanced setup option, on the other hand, exposes three more profiles that you can use to connect to networks secured via WPA or WPA2. It’s worth noting that unlike the DS Lite, the DSi can connect to native 802.11g networks. We had no problems getting ours connected to a g network with WPA2 encryption. If you have a compatible access point, you can connect the DSi to your home Wi-Fi network via Wi-Fi Protected Setup (WPS) or the similar AOSS (AirStation One-Touch Secure System) scheme used by Buffalo wireless hardware.

The DSi’s connectivity gives it the ability to receive periodic firmware updates, which can be used to provide new or improved features and bug fixes. Prior to testing our unit, we applied a firmware update that had already been released.

Shopping for Software at DSiWare

Once you’ve got the DSi linked to the Internet, you can visit the Nintendo DSi Shop online marketplace to browse download DSi-specific software (called DSiWare). Some DSiWare titles can be downloaded for free, but most have price tags of 200, 500, or 800 DSi Points. You can purchase points in lots of between 1,000 and 5,000 either by charging them to a credit card, or by buying Nintendo Points Cards at retail. Points cost a penny apiece, so it’s $10 for 1000 or $50 for 5000; those buying a DSi before 10/9/2009 receive 1000 gratis points to spend.

As of this writing, which was a mere three days after the DSi’s US launch (4/6), the DSi Shop had the feel of a brick-and-mortar store that’s been picked clean due to liquidation. When we went shopping there were a mere seven titles available for download, many of which consisted at least partly of previously-released material. We don’t expect the selection to remain so sparse for long, but only time will tell how copious and vibrant the DSi Shop will become. (If you do find multiple items of interest, you must grab them one at a time since the DSi doesn’t allow download queuing.)

One download of interest that’s available now—and is free to boot—is the DSi’s Opera-based Web browser. While the DSi’s unique design makes for an interesting Web browsing experience, it’s one that has its share of limitations. You can use the stylus to navigate a Web page on the lower screen, and the visible portion of the page corresponds to a zoom window displayed up top. You can tap an onscreen button to swap screens and directly manipulate the zoom window on the lower screen while viewing the page contents on the top, but neither orientation felt particularly natural to us.

Generally speaking, anything other than simple pages takes an inordinately long time to load on the DSi and sometimes doesn’t render properly. Due to the limited resolution of the DSi’s displays, there’s also the frequent need to scroll sites horizontally—a special “column mode” will reformat pages vertically so this isn’t necessary, but it causes pages to load even more slowly and makes it trickier to find content on a page. There’s essentially no support for video/audio content plug-ins, such as Flash.

Ultimately, browsing on the DSi suffers from many of the same maladies found on other small, handheld devices (with the possible exception of the iPod touch/iPhone). We’d rather have the browser than not—we accessed Gmail without too much difficulty, for example—but, for most it will be a bit too fraught with compromise for heavy use.

The DS Lite can’t do much of anything without a cartridge plugged in, but that’s not the case with the DSi, as it includes several built-in programs. One is DSi Sound, which can record and store short audio clips — a maximum of 18 clips of no more than ten seconds each (clip storage is limited to internal memory). Just for yuks, you can change the speed and pitch of your recordings, or apply various distortion filters — like “trumpet” if you’d like to know what you’d sound like as Charlie Brown’s teacher.

DSi Sound will also play music files off an SD card, but only AAC files (unencrypted)—surprisingly, playback of good old MP3 files is not supported. If you’re in a whimsical mood, the DSi will even let you toy around with the speed and pitch of your songs.

You can take snapshots with the DSi Camera app, using the DSi’s shoulder buttons to take your shot and an on-screen button to switch between cameras. There are eleven different special-effects lenses available, and you can apply them either before or after a picture’s been taken. There’s currently no way to use the DSi for videoconferencing, but we’d be surprised if there wasn’t eventually software for it available from the DSi Shop.

The DSi’s battery is user-replacable, and Nintendo says it’s good for four to six hours on the second-highest of five screen brightness settings (the default). We got almost three hours out of a full charge while using Wi-Fi extensively.

It’s worth noting that the DSi isn’t going to take the DS Lite’s place on store shelves; the older unit’s still for sale, albeit with a reduced $130 price tag. Nintendo’s new DSi is more evolution than revolution, and we wouldn’t exactly call it a must-have upgrade for current DS Lite owners. On the other hand, unless you’re especially budget conscious, we think the DSi’s $40 premium over the Lite is worth it for the upgraded hardware, added features, and better connectivity. We only hope the future brings more software to DSi shop’s virtual shelves and firmware-borne improvements like MP3 audio support.