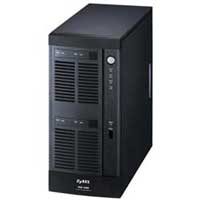 How much storage capacity will be enough for your small business or office down the road? The beauty of a network attached storage (NAS) product like the NSA-2400 from ZyXEL Communications Corp. is that you don’t need to answer that question now. You can start small when your business is small and grow your storage capacity as the volume of data grows.

The NSA-2400 is an “appliance” that manages hard drives to help small and medium-size office users store boatloads of data, keep it secure and make it available on a network to any authorized user. It has its own processing hardware and onboard software, and it includes four bays, each of which can hold a hard drive of up to 1 terabyte (TB).

That’s enough capacity to store tens of millions of text documents, hundreds of thousands of songs and digital photos or thousands of full-length movies. I can remember when a 60 megabyte hard drive was considered sufficient. (Yes, I’m really old.)

The NSA-2400 lets you configure the disks in the appliance in several ways. You can make one big volume &#!51; so that all the disks together look like one big drive. But the NSA-2400 also supports RAID (Redundant Array of Independent Drives, which gives you either improved performance or better data reliability &#!51; or both, but at a cost. It supports RAID0, RAID10, RAID5 and RAID5 Spare configurations.

RAID saves parts of each file on two or more drives in the array &#!51; this speeds up the process. It can also store data twice, once on one drive or array of drives and simultaneously on another drive or array. This reduces the NSA-2400’s overall capacity, but it means that if one disk or array fails, the system can automatically switch to the other so you don’t lose any data, or any time restoring data.

The other big advantage over less expensive single-disk NAS solutions is that the NSA-2400 lets you back up not only client devices &#!51; desktop and laptop workstations attached to the same network &#!51; but also SQL and Exchange servers, without interrupting those services.

The product ships with Genie Backup Manager Lite 7.0 from Genie-Soft Corp., which can back up and restore files, documents, e-mails, settings and programs on client machines, and Genie Backup Manager Server 7.0 for server databases. This software runs on a PC or server and backs up data to the NSA-2400. The device’s own software includes backup functionality that lets you back up its data to another NSA unit or other NAS device or a USB hard drive. There are three USB ports on the NSA-2400 for plugging in external drives.

Like most NAS products, you manage the NSA-2400 from a computer connected to the same network, using a browser to access the device’s onboard software. The software lets you perform a variety of functions related to configuring network and disk volumes, monitoring disk and volume status, backing up and restoring data stored on the appliance and controlling who can access its shares. (Think of shares as Windows folders full of data made available over the network.)

The built-in backup is the only thing at all out of the ordinary for NAS devices. Most of the other functionality is standard fare, though on the NSA-2400 it tends to be more detailed and comprehensive. Yet the user interface is no less intuitive than on other NAS products I’ve tried.

ZyXEL, unfortunately for our testing purposes, sent a unit with disks already installed and partly configured. Installing disks is easy, though. Each bay has a vertical drawer that slides out easily. You bolt the drive to the drawer frame using screws provided with the drive, slide the drawer back into the bay and close the latch to complete the installation.

The rests of my out-of-the-box experience was a little bumpier but ultimately satisfactory. The bumpiness was mainly due to inadequate documentation and misleading messages generated by the software. For example, the hardcopy manual that ships with the product says that when you turn the appliance on for the first time, it will take about 50 seconds to boot up and then the SYS light on the front will turn solid green, along with the Power and LAN lights. It didn’t the first time.

The SYS light remained orange long after the 50 seconds had elapsed. A ZyXEL technical support agent told me that this happened because the disks in the unit were unformatted. If the disks have not been formatted &#!51; and if you’re installing brand new disks in the NSA-2400, as most buyers will, they won’t be formatted &#!51; the light glows orange until you’ve created disk volumes. To do that, you have to install the included client software on a PC first.

The client software, the NSA Discovery Utility (NDU), detects the NSA-2400 on the network and tells you that it’s properly installed (or not). It also provides access to the set-up wizard on the device, a program that guides you step-by-step through the process of formatting and configuring the NSA-2400.

The documentation says it’s also possible to access the software on the NSA-2400 directly, by typing its IP address into a browser address field. This is true, but the software doesn’t open automatically into the set-up wizard but to the home screen with a bewildering array of options and alternative ways of configuring the device. You have to find and click the little icon button in the top right corner to launch the easy set-up wizard, something the documentation doesn’t make entirely clear.

The Genie Lite backup software installed cleanly on my main PC. It’s easy to set up a new backup event &#!51; the program provides a wizard that walks you step-by-step through the process. In particular, it makes it easy to include configuration files, such as the Windows registry in a backup set. You simply select them from a list that also includes Outlook data files.

Genie provides the usual array of options for how you back up &#!51; normal, differential, incremental, mirror. And it offers a roll-back option that backs up multiple versions of a file. If you make changes to the file and then later want to revert to a previous version, you can do that.

However, this program does not let you do “duplicate” type backups where you simply save files to a second location in their usual format rather than in a big compressed backup set with all the other files you’re backing up. This saves you the trouble of going through the restore process if you lose data, and lets you set up a continually updated share with a subset of your files. The program does have a catalog feature, though, that lets you see and search a list of all the files in the backup set. And you can restore selectively, just certain folders and types of files.

My one real beef with the version of the Genie program that ships with the NSA-2400 is that it does not include an open-file backup capability. With some types of files &#!51; Outlook .PST files, for example &#!51; if they’re open, the backup program can’t access them to back them up. Genie does make a plug-in available that adds the open-file capability, but the free download at the Genie site is only a 15-day demo version. You have to pay extra or a license to the plug-in.

ZyXEL claims the NSA-2400 delivers better performance than other NAS devices, with throughput of up to 107 Mbps in Netbench tests. This would only be over a Gigabit (1 Gbps) Ethernet connection &#!51; which would require you to have a Gigabit Ethernet router or hub and network adapter.

I was unable to corroborate these claims, but I can offer this caution about speed of backups to users new to RAID5 backups. While ongoing backups in incremental and differential modes, where you’re only backing up new or changed files, go fairly quickly, the very first backup can take a lo-o-o-ng time. The 59 GB of data I backed up took ten hours, plus another few hours to validate.

Bottom line: The ZyXEL NSA-2400 is a serious piece of storage hardware that can help small business put their data management on a much more professional footing. It takes up little space, it’s easy to set up and offers almost everything you need to set up safe, secure access to and regular, automatic backups of your data.