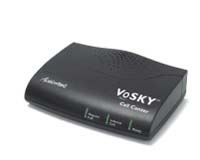 Many people have discovered that Voice over Internet Protocol (VoIP) lets them make reliable and inexpensive phone calls over the Internet. One way to take advantage of this technology is with Skype, the free Internet Telephony application. Based in Luxembourg, Skype has been enormously popular with Europeans for years, but, since being purchased last year by eBay, it’s getting a lot more attention on this side of the Atlantic.

Skype lets you make voice calls around the globe either to other Skype customers (for free) or to “real” phones at negligible, per-minute rates (though rates vary depending on where you call, two-to-five cents is typical for most parts of the world). Skype’s major drawback is its PC-centric nature — you place a Skype call through software running on a computer, and you use the PC’s microphone and speakers (or a headset or a special speakerphone) to communicate back and forth. In an age when most of us roam around while chatting on cordless or mobile phones, this presents a problem.

Enter Actiontec‘s VoSky Call Center, a piece of hardware that makes using Skype convenient as well as economical. For starters, it lets you place Skype calls using any analog home phone, much like the VoIP offerings from telcos and companies like Vonage. Depending on how you set up and configure the VoSky, it can also let you make calls from your Skype account using almost any phone anywhere.

The Set Up
The $69.95 VoSky Call Center is a small, lightweight box with a USB port to link it to your PC plus two RJ-11 jacks to connect the device to an analog phone and a wall phone jack. The VoSky gets its power from the USB port so you don’t need a separate AC adapter. This means that if your computer is a notebook or a desktop connected to an Uninterruptible Power Supply (UPS), you can still use the VoSky for calls during power failures for as long as your battery lasts.

Getting the VoSky up and running isn’t at all complicated and took us about 30 minutes, and that included installing and configuring the Skype software. (The Skype software doesn’t come with the product, but it’s available as a free download.) Actiontec provides a great manual with well laid-out instructions plus lots of screen shots and diagrams.

You can set up the VoSky Call Center in two ways. Single-line mode lets you make and receive Skype calls through your home phone — simply connect it to an analog phone. In order to access your Skype account from an outside phone (like your mobile phone), you need to use the dual-line mode, which means also connecting the unit to a regular wall-mounted phone jack. (In either scenario, the device must be connected to the PC via USB.)

Single-Line Mode
When you set up the VoSky in single-line mode, you don’t have to do any additional configuration once you’ve installed the software and connected the computer, VoSky and the phone to each other. To make a Skype call pick up the phone that’s connected to the VoSky, and you’ll hear a voice prompt instructing you to enter either the Skype speed-dial number (assigned via the Skype software) or the phone number of the person you want to call. The VoSky then places the call using the Skype software running on your PC and over your Internet connection — when you’re finished you simply hang up the phone.

If you happen to be sitting in front of your computer, you can initiate a call using the Skype application, and the VoSky will then ring the phone signaling you to pick up while it connects the call. Conversely, when a call comes in from another Skype user, the VoSky detects it and rings the phone to which it’s connected.

If your phone has built-in Caller ID, Vosky will even display the Skype name of the incoming callers. We used corded and cordless phones with the VoSky and both worked equally well. Whether placed through the VoSky or directly from the application, the audio quality of a given Skype call depends on the condition of the Internet link, but it’s usually quite good and about on par with a good mobile phone connection.

One of VoSky’s shortcomings is that it doesn’t offer a way to look up phone numbers or to speed dial numbers from the Skype application address book. When placing a call directly from software, you can just point and click, but when doing it from the phone you must remember the number you want to dial. If the phone you use with VoSky offers speed dial, you can create special Skype speed dial entries, but this takes extra work and of is only accessible from that particular phone.

It’s worth mentioning that in order to place calls to actual phone numbers on the PSTN (Public Switched Telephone Network) you need to use Skype’s optional SkypeOut feature, which you can activate simply by buying credit in increments of $10 or $25. Another optional Skype feature called SkypeIn — which is currently in beta — lets you get a dedicated phone number for use with Skype (for about $36 a year) so that anyone with a phone can reach you via Skype. With or without the VoSky, unless you have SkypeOut or SkypeIn, you can only make or receive calls with other Skype customers.

Dual-Line Mode
When you set up your VoSky in dual-line mode, the phone connected to the VoSky becomes a normal extension on your phone line that you can use for regular PSTN or Skype calls. It behaves like a normal phone (you hear a dial tone when you pick up the receiver), but you can place Internet calls by pressing the pound key twice to access the VoSky voice prompts.

You can switch back to PSTN mode by again pressing pound twice, and indicator lights on the front of the VoSky show whether you’re on a regular or Internet-based call. (You can also switch between Internet and regular calls while they’re in progress.)

Dual-line mode also gets you several additional VoSky features like Remote Internet Calling, Call Forwarding and Call Return. The most useful of these is Remote Internet Calling, since you can access your Skype account from any phone by calling into your VoSky (via your home phone number) and entering a three-digit PIN. The Call Forwarding and Return features have less universal appeal since they work only with Skype (as opposed to SkypeOut) calls. Call Forwarding sends an incoming call from a Skype user to the phone number of your choice, while Return will ring your phone to let you know when a previously dialed but unavailable Skype user comes back online.

Built-In Answering Machine— Sort Of
While these additional dual-line mode features can be useful, they do come at a price. Since they require the VoSky to have control over your phone line, the device can’t coexist on the same line as an answering machine, or even be used in conjunction with a telco-provided voice mail service. The VoSky gets around this problem by acting as it’s own answering machine, but it’s a very basic one that imposes significant limitations.

For starters, the VoSky doesn’t let you create a customized outgoing message; only a generic and rather curt “Please leave a message.” In addition, you can’t check your VoSky messages from a remote phone — you can only access them directly from the computer. This seems odd given that you can dial into the VoSky to place Skype calls, but it makes sense considering that the VoSky device doesn’t have any inherent storage capacity and uses your PC to store messages. You can specify how much hard disk space to set aside for message storage, and check your messages, from the VoSky configuration utility.

The Bottom Line
If you use Skype a lot, then being able to make your Skype calls from your regular phone instead of sitting in front of your computer is probably reason enough to get VoSky. The dual-mode features may also be useful, but most people will find that being saddled with the rudimentary answering machine negates any benefits those features provide.

Joe Moran is a regular contributor to PracticallyNetworked.