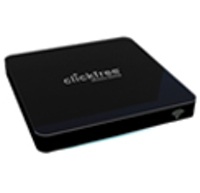 How do you maintain a LAN based data backup on a wireless network? The solution is to have a wireless backup device. The Clickfree Wireless Backup C3 is one such device, offering the promise of ‘click free’ backups without the need for the backup device to be physically connected to the LAN.

What Clickfree aims to deliver with its Wireless Backup unit is an easy way for both Windows PCs and Macs either on the LAN or the WLAN to effortlessly backup data. The Wireless backup unit differs from all previous Clickfree backup offerings in that it doesn’t require any of the backed up PCs or Macs to be physically connected to the backup device after the initial setup. Beyond basic backup, Clickfree has also included a number of useful wired applications for file viewing and CD/DVD archiving that further extends the utility of the device.

The device itself is relatively small measuring approximately 5″w x 0.75″h x 5″d. There is a single USB dongle that slides in nicely to the back of the device, there is an AC adapter plug, and that’s it. There are no Ethernet ports on the Wireless Backup.

Initial setup of the Wireless Backup is exceptionally easy. The way it’s supposed to work is that the user will simply plug the unit’s USB cable into a computer and then sit back as the Wireless Backup self-installs, begins the initial backup and auto-magically detects the wireless network settings.

In our test case on multiple Windows 7 and Windows XP PCs, the actual experience varied, but only slightly. The Wireless Backup relies on the user to have autoplay enabled for new devices. In cases where that’s not enabled, you just need to go through the same process you go through to play any USB or CD/DVD. Once the Wireless Backup is connected (autoplay or manual user play), the installation process begins with the user only needing to click once – to agree to the license terms. Not quite “click free,” but pretty close.

As part of the installation, the Wireless Backup scans the connected computer for files to be backed up. The default options for backup includes a long list of different content file formats. If you don’t click anything, then the default options take over scanning the whole drive for all content formats. You do have the choice to manually select content types and locations where the Wireless Backup should look for files as well – but for our initial test, we went with the full default ‘click free’ approach.

Clickfree Wireless Backup doesn’t back up program files themselves, but the default options will backup up the text and image files (often templates, clip art and Read Me files) that accompany so many types of applications.

To make things interesting, the first computer we connected the Wireless Backup with, was a wired PC that wasn’t connected to the wireless network. The Clickfree Wireless Backup didn’t complain and backed up all the files while connected via USB. Only at the very end of the process was there a dialogue box that indicated that the wireless network configuration options were not obtained.

If for whatever reason, users can’t get the Wireless Backup to pull the WLAN settings automatically there is a manual input option as well. In our experience, with many home users, often the WLAN settings aren’t known as they only set them up once when they initially connect devices. As such, having the ability to detect the WLAN settings is a real bonus.

Unfortunately the Clickfree Wireless Backup is not a continuous data backup enabled device. Users set a schedule by which a differential backup (for new/modified files) is supposed to occur.

The problem is that the scheduled backup also triggers a complete rescan of the backup PC for files to backup. In other words, the backup utility that Clickfree installs does not track new or modified files as they are created or modified. So if all you do is create a single new file, the Wireless Backup still needs to scan your whole drive (or the selected folders that the user configures) in order to identify that one new file was created. That’s not the most efficient way to do backups, especially for users with large (or slow) drives, with all the default options (all files type and the full drive) enabled.

Yes, it’s still a differential backup and only physically backs up new/modified files, but the fact that the drive needs to be scanned again is where we have an issue.

The other small point on backups is that the User Manual (as currently available on Clickfree.com) is inaccurate about the scheduled backup default settings. The manual indicates the default backup schedule is set for every two hours – the actual reality is that the default set the backup for every day. Users can configure the scheduled backup, all the way down to one hour, which isn’t exactly a continuous real time data backup, but certainly better than one day. Additionally there is a ‘backup now’ option, so if you really feel the need to run a backup, all it takes is one click.

The user manual indicates that when viewing photos, there is a thumbnail view mode, which can also enable users to print and share pictures on Facebook or email. Unfortunately the user manual does not indicate that the picture viewing utility is only available when the Clickfree Wireless Backup is physically connected via USB, which is the only way we were able to get the picture viewer to work. For a device that is intended to be a wireless backup, it is somewhat annoying that thumbnail images cannot be viewed on the device unless the drive is ‘wired’ via USB.

The other mildly annoying item is that Clickfree Wireless Backup should also be accessible directly via IP (as a connected WLAN client, it gets an IP address like any other client), though Clickfree doesn’t make that process easy. When we attempted to login to the Clickfree Wireless Backup via the IP address, we got a regular HTTP response with a username/password request for access. Unfortunately, Clickfree’s user manual does not provide the username/password for the device. Even more frustrating is the fact that Clickfree’s email customer support was clueless about the issue.

Restoring files on the Clickfree wireless backup is a relatively painless process. Using the file viewer any individual file can be restored to its original location, or to any location as chosen by the user. As is the case with setting up backups, restoring files requires very few clicks and is easily done.

There is also an interesting option that will enable users to archive data backups onto a CD/DVD. There is however a small catch – the CD/DVD archive features requires the Clickfree Wireless Backup to be connected via USB to the local computer.

The Clickfree Wireless Backup C3 is an interesting device for WLAN users. The ease with which the device is setup is quite astounding, even though it’s not entirely ‘click free’. The way that the device is able to automatically pull the configuration data for a WLAN access point is a major bonus that also really makes this device easy to setup and get running.

The lack of privacy or access control for the multi-user backup is potentially a significant issue for some users. Though for small user groups or home users, the fact that everyone can see everyone else’s data backups may not necessarily be such a big deal.

The Clickfree Wireless Backup likely lacks the power, storage and configuration options that power users often crave. However, those that are seeking a simple to use and configure wireless backup solution should likely consider the device as a solution for their needs.