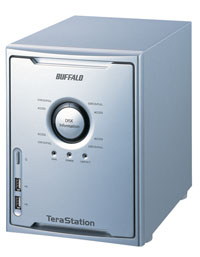 As you may have noticed, there are a lot of Networked Attached Storage devices currently on the market. Many (if not most) of the ones targeted at small businesses, and are actually in the small business or SOHO price range, are typically single-drive setups used for backup or file serving duties. Yet, single drives on their own don’t have any real redundancy, so what do you do when your single drive backup fails?

The Buffalo TeraStation Terabyte NAS appliance goes far above and beyond the norm and offers a killer combination of power, storage capacity, fault tolerance, connectivity and price.

What It Is — Features, Features and More Features
Buffalo Technologies TeraStation NAS is a solid small foot print appliance (6.6 x 8.7 x 9.5 inches) that looks like a vault. It includes four hard drives that can be configured in four different configurations. The TeraStation is currently available in three different models, 0.6 Terabytes, 1 Terabytes and 1.6 Terabytes. For this review, PracticallyNetworked.com reviewed the 0.6 TB model.

The unit includes four 160 GB SAMSUNG SP1604N hard drives, which are 7200 RPM drives with an ATA133 interface. The drives can be configured as four separate 160 GB shares, spanned into a single massive volume, mirrored in a RAID 1 setting (two 160 GB shares) or configured as a RAID 5 setup.

RAID 5, which is the default setup, provides a more-than-adequate degree of data protection for most. Under RAID 5, should one of your drives fail, you don’t lose any data, all you need to do is swap out the failed drive. An additional degree of protection is provided by the default XFS file system, which is a high-performance journaling file system.

A key part of a NAS is, of course, on the network side and the TeraStation again goes above the norm. On the external interface side, the TeraStation includes Gigabit Ethernet (GbE) connectivity including support for Jumbo Frames. The appliance also provides visual cues regarding network speed. The front LED lights on the appliance is lit green for a 100 Mbps connection and blue for a GbE connection.

The device supports regular TCP/IP and AppleTalk as well as providing SMB (Samba) protocol support. To top it off it can also function as a standalone FTP server as well.

Backups
NAS appliances are, of course, commonly used for backups. At first glance, I would have thought that the Disk Backup tab on the Web administration tool would handle all my backup needs. Unfortunately, that’s not quite the case. What the TeraStation installed backup does is actually provide an interface to create backups of the TeraStation itself, which is certainly useful. It does not directly handle PC backups — though that’s not to say that Buffalo doesn’t leave you empty handed on that either.

Included with the TeraStation is an evaluation disk for the Memeo backup utility. As opposed to many other typical low-cost backup solutions Memeo automatically backs up files as they are changed on your PC. It’s not exactly Continuous Data Protection (define) but it’s not that far off. Memeo runs in the background and can be configured to back up specific types of files as opposed to just backing up your entire drive blindly.

It’s unfortunate that Buffalo provided only an evaluation and not a full version of Memeo bundled with the TeraStation. That said, Memeo is only $30 for the full version, which is well worth the money. Certainly there are many other PC-based backup solutions, including default Microsoft Windows XP solutions that can be used as well.

Give It a Rest
In many cases, there is no real need to keep your TeraStation actually on and ready to serve files 24 hours a day. That’s where the Disk Sleep function comes into play. You can set you TeraStation to go to sleep and wake up at specified time, which ultimately should serve to help maximize the life of your drives as well as help to reduce your overall power consumption.

Though the Web-based administration tool is reasonably complete, it’s missing a Web-based logging feature. You can setup the device to send e-mail notifications of errors and such though the feature requires that you have an SMTP (define)server. It sure would be a whole lot easier if the TeraStation has its own built-in mail server (SMTP or otherwise).

The manual for the TeraStation is also good, though it would have been nice if Buffalo had included some form of context specific help.

Rock Solid Performer
In just over a month of use, we found the Buffalo TeraStation Terabyte NAS to be a reliable and easy-to-use appliance. Simply put, it works as advertised. The appliance was easily recognized and connected to both Linux and Windows PC in our test environment over both 100 Mbps and 1000 Mbps connections in different scenarios without issue.

Certainly, I would have liked to have had a PC backup managed directly through the TeraStation’s Web interface as opposed to just backups of the TeraStation itself. But that’s a relatively minor issue considering the long list of ways you have of setting up backups for your PCs.

The Buffalo TeraStation Terabyte NAS is a sleek-looking performer that brings a strong RAID 5 reliable solution to small offices. If you’re looking for more than just the “likely-to-fail-at-a-bad-time” one drive backup, than you probably should be considering this NAS appliance.