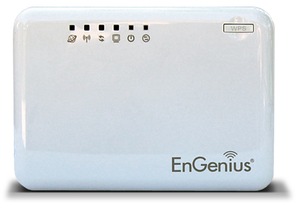 Travel routers, portable Wi-Fi routers for use in places where an Ethernet connection is available but there is no wireless, are perhaps not as popular or necessary as they once were, partly because Wi-Fi connectivity is now so ubiquitous.

But they are sometimes still needed. We spent three days at a conference in Las Vegas earlier this year, staying at a major hotel where the only connection in the rooms was an Ethernet cable that came out of the wall behind the TV. The hotel thoughtfully provided a long coil of cable because the desk was 10 feet across the room on another wall. With cable extended, we could also hang out our laundry.

The ETR9330 300Mbps Portable Wireless N Router from EnGenius (about $45), a 2.4GHz (11b,g,n) product that we tested recently, would definitely have come in handy.

The ETR9330 has just about all the Wi-Fi bells and whistles you could ask for — including Wi-Fi Protected Setup (WPS ) and all encryption options — in a very small package.

The industrial design is pleasing and thoughtful. There’s a built-in magnet, for example, to make it easier to mount the device for optimum reception. And the ETR9330 works pretty much as advertised, albeit with a couple of rough edges. Given its size and modest price, this is a gadget well worth packing in your laptop bag, just in case you run into an Ethernet-only situation.

Part of the reason it works well for the intended purpose is that it really is portable. The ETR9330 measures 3.5 x 2.5 x 1.25 inches and weighs only a few ounces. (EnGenius doesn’t provide physical specifications.) The supplied cables are easy to pack too. The Ethernet cable is about two feet long, the power cable – no big power transformer, just a wire – about three feet. Given that the most common application will be plugging in to the RJ-45 port at a hotel room desk where power is sure to be close by, this is all you need.

The ETR9330, it should be noted, can also be used as a wireless bridge with network devices that don’t have wireless connectivity. You could conceivably use it with an Ethernet media device to stream media over your home network, though we did not test this.

The out-of-box experience with the ETR9330 was reasonably good. The single-sheet Quick Start Guide reads as if it has been translated. The English is not terrible, but slightly eccentric and occasionally ambiguous. Luckily, the product is so simple to set up it mostly doesn’t matter.

There is a half-size CD with a set-up wizard on it that the Quick Start Guide instructs you to use. The idea of the half-size disc, we suppose, is to make it easier to carry with you. Good idea, but it could be problematic for users with slot-load CD/DVD drives.

In any case, there is also, as with most routers, browser-based configuration and setup software (complete with the wizard) on the router itself. The disc is presumably for those unfamiliar or uncomfortable with using browser-based software to set up a network device.

We tested the ETR9330 by plugging in the Ethernet cable from our cable modem, which delivers 10-Mbps service. The router basically set itself up: we were almost instantly able to access the Internet.

In speed tests, both on the local network and the Internet, the ETR9330 held its own against our existing full-size Netgear draft-N router, as long as the computer was reasonably close to the router. Performance fell off more quickly over distance. In a room where Wi-Fi access is consistently poor at the best of times, performance from the travel router fell off dramatically.

This is not a major downside. A travel router doesn’t really have to offer optimum range. The most likely use cases are in a hotel room or meeting room, where you’ll be close to the router and unobstructed by walls.

The bells and whistles are impressive for such a simple and inexpensive product. As noted, the ETR9330 can be used as a client bridge to add non-wireless network devices to a Wi-Fi network. It also works in simple access point (AP) mode, in which it doesn’t assign IP addresses or deliver other router functionality.

The router functionality is very complete. The device supports multiple SSIDs, so you can create a separate network for sharing an Internet connection, for example, while keeping local data private. It supports NAT (network address translation) to enable secure Internet connection sharing, and UPnP (Universal Plug and Play) for easier media sharing.

Quality of service (QoS) can be set up in a couple of ways, using either priority queue or bandwidth allocation techniques.

The ETR9330 includes a firewall that uses Stateful Packet Inspection (SPI) technology – keeping track of the state of ongoing network connections to ensure accurate identification and appropriate treatment of packets. It supports encryption up to WPA2 Mixed (Wi-Fi Protected Access) and Wi-Fi Protected Setup to make it easier for non-technical users to implement WPA across a network.

The browser interface is one of the most responsive and intuitive we’ve seen and includes features not always included even with full-size routers, such as both an activity log and continually updated graphic monitors.

EnGenius doesn’t have a lot of competition for this product. Trendnet has a 300Mbps Wireless N travel router (which we have not tested), but it’s slightly more expensive. There may be some 11g travel routers left in the retail channel, but not much else.

There is of course a plethora of devices now that connect to 3G networks and then provide Wi-Fi access to that bandwidth, but those require 3G data access, which costs money.

This product is purely for situations where you have wired Ethernet access to the Internet and want wireless access, either so you can move around in the space you find yourself, or provide access to multiple users.

Be aware, however, that if the main use case is allowing access to multiple users, you can do this by bridging a wired and wireless connection on a host computer and then allowing ad hoc connections to it from other computers.

Still, this is only $45, maybe worth it for hassle-free mobile Wi-Fi.