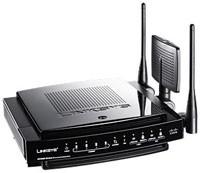 The Dual-Band Wireless-N Gigabit Router (WRT600N) from Linksys, part of the Cisco subsidiary’s N Ultra Rangeplus line, has one thing going for it that few, if any, other consumer-grade Wi-Fi products do. It’s a dual-band, dual-radio router that can run two simultaneous wireless networks. In effect, you get double the network capacity.

One of the WRT600N’s radios operates in the 2.4 GHz band and supports 802.11b, g, and draft-n devices. The other operates in the 5 GHz band and supports 802.11a and draft-n devices. Wi-Fi 11n devices operate either in the 2.4 GHz band — the case with most — or 5 GHz, or both, as in the case of the N Ultra Rangeplus adapters Linksys introduced to work with this router.

The adapters include a Cardbus model (WPC600N – about $75 online), an ExpressCard model (WEC600N – about $90 online) and, most recently, a USB dongle (WUSB600N – about $90 online). Note that manufacturers’ list prices are quite a bit higher for all of these products, and the brick-and-mortar retail prices we found were also slightly higher. Also note that other draft-n adapters can connect to the WRT600N router, but most only to its 2.4 GHz network.

The dual-band capability is important because Wi-Fi is a shared medium with limited bandwidth. If two users are connected, each gets half the available bandwidth. If both are transferring huge files over the network at the same time, data speeds will be significantly slower than when only one user is connected or one is transferring data. Having two networks means you can manage network capacity more efficiently.

Linksys is suggesting that home users can operate a data network over 2.4 GHz and a media network over the less crowded 5 GHz band. Of course, you would have to have a 5 GHz 11n wireless media adapter to make this work. Surprise. Linksys just happens to have a new line of dual-band Windows Media Center Extender products ($300-$350), adapters that work hand in glove with Windows Vista. Nobody else to our knowledge has 5 GHz media adapters.

One other useful feature with this router, one included in a few competing products but by no means all, is a USB port for plugging in an external hard drive or flash memory unit, which any computer on the network can then access directly over the network. The router functions in effect as a storage server.

The WRT600N also, like some other routers with storage server functionality, includes a built-in media server. It can stream music, video and photos stored on the attached device to any media adapter compliant with the UPnP (universal plug ‘n’ play) standard. This means theoretically that you can stream media even when the computer running the adapter’s server software is turned off.

Finally, this router supports remote access and dynamic DNS (a service for which you pay), so you can access files from anywhere on the Internet.

We tested the router with the ExpressCard adapter. Our out-of-the-box experience was not perfect. The wizard-based set-up program that comes with the product, designed for network newbies, did not work as advertised when we tried it. The program appeared to freeze near the beginning of the process.

This doesn’t mean you will have the same experience. In fact, it’s very likely that some peculiarity of our system caused the problem. A company as good as Linksys doesn’t usually release software that fails routinely.

Linksys technical support — which to its credit is available 24/7 and answered very quickly — would not even attempt to troubleshoot the problem with the wizard. The agent wanted to walk us instead through the manual set-up procedure, which is not very difficult, especially if you’ve installed one of these things before.

Connecting already existing 802.11g devices on our network to the WRT600N posed no problems whatsoever.

But, we did also have a little trouble setting up a storage unit on the WRT600N’s USB port. On our first attempts, the router wouldn’t even recognize that a drive was plugged in. We tried several drives and cables. The problem was only resolved after we powered the router down and back up again. It appears to have been a temporary glitch.

We tested this feature using a 500GB Western Digital My Book USB drive. After we set it up in the router’s generally fairly intuitive browser interface — where you establish authorized users and shares folders on the disk — the drive did not show up where it should in Windows under My Network Places.

This was probably due to a problem with the set-up of Windows networking on our production machine. We were able to find the disk by keying its name into the Windows search utility. And we were able to “map” it to the PC in My Computer so that it shows up as a share whenever we log in.

And we were able to set it up as the destination for an automated backup using EMC Retrospect backup software.

We were not able to successfully test the WRT600N’s media server functionality, however — even though setting up the server in the router’s browser interface is easy enough. You simply select the folder that contains the media files in the Storage/Media Server tab to create a share, and then tell the router to scan that share to generate a library index based on the tag information attached to the media files.

UPnP is an industry standard and the “plug ‘n’ play” part implies easy to use, but in our experience, it is anything but. Our Logitech Slim Devices Squeezebox wireless music player supports UPnP servers, but the company provides no documentation and a Slim Devices technical support agent couldn’t help, although he said what we wanted to do was theoretically possible. He referred us to an online user forum.

To test network performance, we timed large-file transfers between my main machine, connected to the router by Ethernet cable, and a laptop, first using the laptop’s built-in 802.11g adapter and then the Linksys WEC600N ExpressCard adapter.

To ensure optimum performance, we turned off all other wireless devices and when testing the 802.11n link, we selected Wireless-N Only as the Network Mode in the router’s browser interface, which according to some reports ensures the router uses the maximum width of radio channel.

Wi-Fi vendors claim that draft-n has a theoretical top data speed of 300 megabits per second (Mbps) and actual throughput of somewhere in the 150-to-200 Mbps range. Analysts have assured us that well designed 11n networks using enterprise-grade access points routinely deliver 150 Mbps. But, we have yet to experience anything close to this performance with any consumer product we’ve tested.

We’re not sure if this is because of idiosyncrasies in the radio propagation characteristics of our testing area, or because we’ve never optimally positioned the router and its antennas for best performance, or simply because the consumer products are not as well engineered.

In any case, we measured data throughput of 62 Mbps when the laptop was in the same room as the router, about 2.75 times the speed measured when using the laptop’s 11g adapter.

Throughput fell off dramatically when we moved the laptop to another room about 30 feet away on the same floor with walls and doors in the way — 40 Mbps. And when we took it downstairs where it was obstructed by floor, furnace pipes and a wall, we measured only 28 Mbps. Data throughput did not fall off quite as rapidly when using 802.11g.

Still, for most purposes, and especially considering that this router lets you set up two networks, doubling capacity, the performance is more than adequate, and still considerably better than 11g. It was certainly fast enough that we could stream an HD-quality video clip over the network from my main computer to the laptop. It played flawlessly.

The trick is that in a real world application you might want the network to be able to support multiple HD streams, plus Web browsing, plus mega file transfers. Will the router deliver enough capacity then?

Possibly not. But the bottom line is that with this router, because of its dual-band, dual-network capability, you’ll be able to accommodate far more network traffic — up to double the amount you could with a conventional single-radio router.

Gerry Blackwell is a veteran technology writer based in London, Canada. He writes for several other Jupitermedia sites, as well as major business and technology publications in Canada.