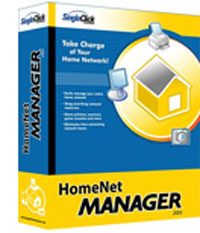 Remember the days when the typical home network consisted of a single PC connected to a dial-up modem?

Well, we don’t either. These days, the well-connected home is more likely to have a broadband connection shared by multiple PCs and possibly a host of other networked devices as well, and knowing what you’ve got and keeping everything communicating isn’t always easy, particularly for the nontechnical.

SingleClick Systems aims to make home network management easier with the third iteration of its HomeNet Manager software. The company recently announced with much fanfare that Dell is shipping the utility with all its consumer systems (albeit under the name Dell Network Assistant). HomeNet Manager provides a host of features including wireless network configuration, network-resource sharing, and device management and troubleshooting.

Wireless Network Configuration
When you install HomeNet Manager on a Windows XP system with a wireless network adapter (it also runs on Windows 2000), the software’s first official act is to prompt you to turn off XP’s Wireless Zero Configuration (WSC) feature (or we sometimes call it, Wireless Zero Connect). That’s no great loss, because what you get in exchange is a fully functional WLAN client with a configuration interface that’s a lot more flexible and user-friendly than what comes with Windows.

For example, when you set up a new wireless network connection, you don’t have to concern yourself with technical details such as the encryption method in use (or the key length, if dealing with WEP). All you have to do is enter the key, and shortly thereafter you’re connected. In particular, WEP users who use a passphrase to simplify key generation will appreciate that they can use the same passphrase to connect the HomeNet Manager client. This certainly beats copying down and entering a long 13- or 26-character key.

We did notice however, that while HomeNet Manager lets you pick from available networks to join, it doesn’t seem to have any provision to specify a SSID manually, which this could be a problem if you want to join a network that has the SSID broadcast feature turned off. A SingleClick representative told us that the software should detect such networks and prompt you to enter its SSID, but it didn’t work for us.

After joining a network, you can create a profile for it, assigning a name and icon to the connection to easily identify it (e.g., home, work, school, coffee shop and so on). If a wireless connection (or a wired one, for that matter) is lost for some reason, HomeNet Manager promptly starts a repair wizard that automatically executes all the behind-the-scenes machinations like disabling and re-enabling the interface, recycling the DHCP address, and so forth. If it can’t fix the problem without you, HomeNet Manager offers suggestions on what to try, such as checking cables or power-cycling devices.

Device Management
As you add more network-enabled devices, it can become difficult to keep track of them — to know what (or where) they are and when they’re not working properly. HomeNet Manager can help by automatically locating devices and displaying a list of them organized by category. When you mouse over a icon in the list of devices, you get some basic network info about it, such as IP address and related configuration parameters. Double-clicking an icon gives you additional information, including shared folders and other available resources.

HomeNet Manager couldn’t correctly identify all our network devices by name. It couldn’t specifically ID non-PC devices like a TiVo DVR, Xbox 360 game console or a Netgear wireless print server, for example. But when you encounter an unknown device you can access an online device database to look up what it might be (based on what’s known about it — usually at lease the manufacturer). The database also provides links to product manuals, which is handy. Once you’ve determined what an entry is, you can relabel it with a descriptive name and icon.

In addition to all your client devices, HomeNet Manager also displays icons for your broadband router and Internet connection that you can use to access the router’s login page and display your ISP-assigned global IP address, respectively. We particularly like the latter feature, since finding the global IP (which often changes regularly) usually involves digging deep into your router’s administration console.

Beyond locating your IP address, HomeNet Manager seems to do a good job figuring out who your ISP is (it correctly identified ours as Comcast). It includes a handy speed test for your broadband connection that you can run right from the application. Our only complaint about the test is that it reports only download speed, since for users of applications like VoIP, videoconferencing, or online gaming, upload speed can be just as important. In any event, we found the test results jived with those of the popular speed test provided online at www.broadbandreports.com.

Another feature that you may find handy is My Digital Home, which lets you create a graphical representation of each of the rooms in your house. You can then associate each device found on your network with the appropriate room. Although My Digital Home probably won’t be much use for those with only a device or two, if you have lots of them it can help you more easily distinguish between, say, the living room and bedroom TiVos or the bedroom printer versus the one in the den.

HomeNet Manager provides pop-up notifications for a variety of network events (such as when devices go on- or offline). We do like having easy access to this kind of information, but the notification window that appears in the lower right corner of the screen is far too large. You can suppress various types of messages to reduce the frequency of pop-ups, but we wish they could simply be made less obtrusive (like a small bubble above the tray).

Resource Sharing
Sharing resources such as folders or printers between Windows PCs can often be a pain for the uninitiated, but even the most neophyte user should have little difficulty doing so when they install HomeNet Manager on all their Windows sytems. HomeNet Manager offers a very simple sharing mechanism, so simple that you almost can’t call it a wizard since because there’s only one dialog box to deal with. You essential pick the folder or printer you want to share, assign a name for the share, and click OK.

There is a central place in HomeNet Manager that lists all the shared resources on the network, and when you select a device listing in the program you can view or access the resources available on that particular computer. You can also remotely view the system’s firewall settings to make sure the ports required for sharing are open. (If not, HomeNet Manager will tell you which ports are blocked but you need to configure the firewall manually back on the system in question.)

Security
Security is, of course, important for your home network, and HomeNet Manager includes an Intruder Protection feature that you can use to keep unauthorized systems from connecting to yours. You can choose to block any new client that attempts to join the network, or block individual systems by selecting them from the list of online devices.

Most home network management tools that include security feature work by interacting directly with your broadband router to activate a feature like MAC address filtering, but HomeNet Manager takes a different and fairly novel approach. It tries to thwart unauthorized systems essentially by spoofing your network’s DHCP server and then responding to a new client’s IP request with an address that is technically valid but on a isolated subnet that has no access to the subnet in use. In the event an unauthorized client is configured with a static IP, HomeNet Manager switches tactics and responds to ARP requests for the address in question, which triggers an apparent IP address conflict and invalidates the address.

We tried the Intruder Protection Feature against both DHCP and static IP clients, and it did work as advertised. However, the feature isn’t foolproof so it should be used only in addition to, rather than in lieu of, hardware-based security features such as wireless encryption. Also, HomeNet Manager’s Intruder Protection shouldn’t be used on a public network such as a Wi-Fi hotspot where it would almost certainly cause havoc with people trying to access it.

Conclusion
We ran HomeNet Manager on several Windows systems and for the most part it worked without any major problems. (For reasons that we can’t explain, it ran very unstably on one of our four test systems, however.)

You can download a fully functional version 30-day trial version of HomeNet Manager from www.homenetmanager.com, and registering the software after the trial period costs $39.95. SingleClick Systems is to be commended for bucking two unfortunate software trends these days. First, the HomeNet Manager license allows you to install the utility on as many systems as you want. Even better, once you register the program, you’re done paying for it — there are no annual subscription fees to content with.

We think that most people — particularly those who are less technically-inclined — will find HomeNet Manager a good way to enhance the usability, management and security of their home network.