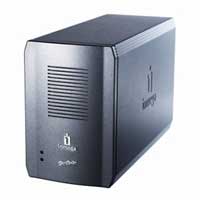 Iomega’s fourth generation StorCenter Network Hard Drive brings many of the features found in higher-end storage devices down to a price that’s sure to be attractive to small businesses and home offices. The company’s newest StorCenter comes in 500GB, 750 GB, and 1 TB models.

We tested the 1 TB StorCenter, which sells for $389 and sports a pair of 500 GB SATA-II hard drives, each with 8 MB of cache. Given the presence of two drives, your storage configuration options consist of RAID 0 for performance or RAID 1 if you’re willing to forgo half the capacity to gain the security that data redundancy provides.

The StorCenter’s out-of-the-box default is RAID 0, which we’re not sure most people would choose given that it doesn’t safeguard your data. In fact, you can argue that it actually increases the risk since if either drive fails, you’ll lose the contents of both drives.

If you want the StorCenter’s full capacity without the performance benefit of reading and writing drives both drives in parallel, you can also configure it in JBOD (Just a Bunch of Disks) mode. The StorCenter’s storage configuration is easy to change from the administration console, though since it’s a destructive process it pays to do so before putting any data on it.

The StorCenter has a compact gun-metal gray metallic chassis that runs warm to the touch — and runs quietly — in spite of a small fan that rids the unit of excess heat. It connects to your network via Gigabit Ethernet, and the back of the unit sports a pair of USB ports that you can use to connect and share printers as well as additional storage in the form of external hard drives or flash memory devices. You can devote both ports to either storage or printing, depending on your needs.

The StorCenter doesn’t offer especially easy access to the drives inside, so you’ll have to remove four screws and do some spelunking should a failed drive need to be replaced. Although the capability to swap drives isn’t something you typically get with twin-drive storage devices in this price range, a similar product from LaCie — the 2big — does offer hot-swappable drives (though it lacks a in print server).

The StorCenter includes a Discovery Tool that will can locate the drive on the network and map the drives, but all StorCenter configuration is done via the browser. The administration interface lets you easily set up your own users and groups, but you can also configure the StorCenter to integrate with Active Directory, or an NT domain if you’re company’s old-school. (Iomega recommends a maximum of 15 people sharing the drive.)

The StorCenter supports SMB, NFS, and SPF network protocols, so it will work with Windows, Mac, and Linux clients. It also supports access through FTP, but that’s limited to one folder at a time. It’s probably not a big selling point for business customers, but the StorCenter can be configured as a UPnP Media Server to stream audio and video to a media adapter connected to a TV.

Recognizing that customers are likely to want to backup clients to the StorCenter, Iomega includes a bundled copy (along with two licenses) of EMC’s Retrospect Express backup utility. Retrospect includes a disaster recovery feature, so you can do a complete restore of a system directly from the StorCenter by booting with a CD/DVD. If your StorCenter isn’t configured with RAID 1, you can backup the unit itself to an attached USB device or a location on the network.

Not too long ago, a $389 would have bought you little more than a bare-bones network hard drive. In the form of the Iomega StorCenter, that same amount gets you a network storage device with USB storage/printer ports and Active Directory support, features once available only on more expensive models. And since the lower-capacity StorCenter models are single-drive devices, the 1 TB version represents the most flexibility and value, given that it’s a mere $20 more than its 750 GB sibling.

Bottom Line
If you can live without the easy swapping and don’t need the extra capacity and RAID features of a four-drive storage device, the 1 TB Iomega StorCenter will be a worthwhile addition to your network.