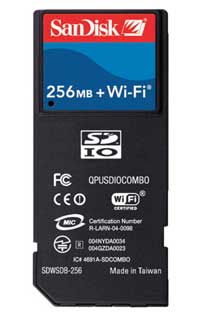 If you own a PDA with an Secure Digital (SD) slot and you’re looking to add Wi-Fi to it, you’re probably aware of a few SD-based Wi-Fi adapters now available. Dedicating your SD slot for this purpose, however, relegates you to the mere 64MB of RAM internal to most PDAs. Most people that use a PDA extensively will tell you that sooner or later you’ll need to augment that with a memory card. Having to choose between connectivity and storage can put a real crimp in one’s productivity.

A solution to this dilemma comes in the form of the 256MB + Wi-Fi card from SanDisk. As its name clearly implies, the card combines 256MB of memory and an 802.11b Wi-Fi radio into a single SD card — it’s one of the first devices to combine two functions on a card of that size. Now you can have wireless connectivity with expanded memory with no need to resort to inconvenient card-swapping.

The 256MB + Wi-Fi card is twice as long as a standard SD expansion card, which is necessitated by not only the additional real estate required by the radio, but also the need to have an antenna located outside the confines of the PDA device (a small blinking light indicates when the radio is on). To accommodate the added electronics, the upper half of the card is also roughly twice as thick as the base. The protruding card isn’t nearly as low profile as say, the built-in Wi-Fi antenna of the Dell Axim, but isn’t terribly obtrusive.

The biggest disappointment of the product is the SanDisk card’s compatibility with PDA devices: it’s far from universal. SanDisk says the 256MB + Wi-Fi card is compatible with Windows-based PDAs running PocketPC 2002, PocketPC 2003 or Windows Mobile 2003 operating systems. There is currently no support for Palm-based devices. Aside from running one of the aforementioned operating systems, the PDA must also have a SDIO (Secure Digital Input/Output) compatible expansion slot.

Since SDIO slots look just like— and are backward-compatible with— SD slots, you can’t tell visually which is which. Many older PDAs (and even some newer ones) provide garden-variety SD slots that support only memory cards, so check your device documentation. Unfortunately, SanDisk’s Web site doesn’t provide a list of compatible devices.

I initially tried getting the 256MB +Wi-Fi card to work with a HP/Compaq iPaq 3975 that was ostensibly compatible since it was running PocketPC 2002 and possessed the requisite SDIO slot. However, while the WLAN utility installed correctly and the device worked flawlessly as a memory card, the Wi-Fi portion was inoperable. A SanDisk representative suggested that the card may not work with some “older” models. I was subsequently able to get the card to work in two other more current PDA devices— a Dell Axim X30 and a NavMan PiN, running Windows Mobile 2003 and PocketPC 2003, respectively.

The SanDisk card’s wireless utility is more informative and intuitive than the standard Windows Mobile/Pocket PC WLAN control panel. Installing the SanDisk utility via ActiveSync was uneventful, and once installed on the PDA, it allows you to control hardware functions of the device including whether the wireless radio is enabled and power saving mode is active. The utility provides nine power saving levels on the “best performance” to “best battery life” continuum, and it installs itself on the system tray so you can shut the radio off with taps of the stylus.

You also can use the utility to define multiple profiles for different wireless networks, though I usually found it necessary to reset the PDA when traveling between networks to successfully connect to the new one. I’ve seen this phenomenon on other Windows PDAs with built-in Wi-Fi though, so I suspect it’s an OS rather than utility issue. The SanDisk supports both WEP and WPA encryption as well as 802.1x authentication. I was able to use the SanDisk card to connect to a number of WLANs with both 802.11b and 11g access points (remember to enable mixed mode on the latter) and encrypted with both WEP and WPA.

To test the wireless throughput of the SanDisk card, I used IxChariot along with the performance endpoint for Windows CE. The test device was a Dell Axim X30 with a 312 MHz CPU and built-in Wi-Fi (switched off when the SanDisk card was in use), and the AP was a Broadcom-based Buffalo AirStation G54. For throughput testing, I disabled power management settings for both the wireless adapter and the overall device.

The SanDisk-equipped Dell Axim turned in wireless throughput of about 1.25 Mbps when located in the same room as the AP and at 10-foot distance from the access point. When moving around at a various distances from the AP, throughput remained essentially the same, dropping to just over 1 MB, and I was able to get about 75 feet away from the access point before losing the wireless signal.

In comparison, the Axim’s built-in Wi-Fi adapter fared better, both in throughput performance and in range. At a distance of about 10 feet, the Dell Axim’s built-in Wi-Fi turned in a throughput score comparable with any PC-based 802.11b client—about 5.4 Mbps. When moving around at a various distances from the AP, throughput dropped somewhat, to about 4.5 Mbps. Using the built-in wireless, I was able to get about 110 feet away from the access point before losing the wireless signal.

Enabling the various power management features didn’t have a significant effect on the wireless performance in either case.

It would seem likely that the SanDisk’s inferior throughput is due to the impact of the SD card interface, perhaps in terms of the limited bandwidth available (compared to internal busses) and also in the amount of power than can be accessed through the SD slot to operate the device.

While the SanDisk’s lower performance numbers would seem a serious indictment of the product, the truth is that the performance difference isn’t particularly apparent in practice. There was little to no perceptible difference between the SanDisk card and the Dell internal adapter when accessing Internet-based services like browsing or e-mail. After all, even a mere 1.25 Mbps is more than a match for most broadband connections. If planning to access large files however, the lower performance could be more of a liability. Then again, a PDA’s limited RAM and storage will be more of an impediment to that than limited wireless performance.

Expansion memory and Wi-Fi support are probably the #1 and #2 things a PDA owner will likely need or want, so the addition of a device like the SanDisk 256MB + Wi-Fi that combines the two is practically a no-brainer, at least if you aren’t willing to buy a new PDA. At $149, the SanDisk 256MB + Wi-Fi’s price tag is less than half the cost of a new Wi-Fi enabled PDA with a 256MB memory card.

The biggest drawback to the SanDisk 256MB + Wi-Fi is its relatively limited compatibility, but if it will work with your PDA, you probably won’t be disappointed with it.