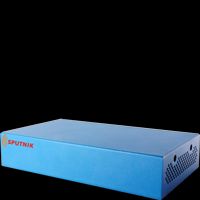 Sputnik 720 Wi-Fi Hotspot Gateway Author: Eric Geier Original URL: http://www.wi-fiplanet.com/reviews/article.php/3768021 If inexpensive routers aren’t cutting it for your network, consider the Sputnik 720. The high-performance hotspot gateway carries a high price tag but it is powerful, customizable and easy to deploy.

The word “Sputnik” naturally triggers thoughts of satellites and the start of the Space Race. If you aren’t familiar with Sputnik-1, the first artificial satellite to be put into space (by the Russians on October 4, 1957), you may have heard about the Sputnik program during its 40th anniversary in 1997. (We were lucky enough to catch the signals from the commemorative Sputnik 40 satellite using Amateur Radio gear.) Sputnik no longer orbits the earth. However, inspired by its ground-breaking impact on human communication, a San Francisco based company that envisions a world filled with unlicensed, broadband wireless networking has taken it as its namesake.

Sputnik’s main offering, called SputnikNet, is a Wi-Fi hotspot management platform, which can be run on-site or hosted by Sputnik. Using supported gateways or wireless routers, SputnikNet centralizes the management and monitoring of multiple Wi-Fi hotspot locations. SputnikNet is even beneficial for owners of single hotspot locations, as it lets them better set up how access is given. For example, SputnikNet allows hotspot owners to charge end-users’ credit cards, offer guest access, or require end users to view Terms of Service before using the connection.

Hotspot administrators have a variety of ways they can obtain a Sputnik gateway. They can upgrade supported third-party routers into Sputnik-powered gateways; they can purchase pre-upgraded routers available through Sputnik; or they can purchase the branded Sputnik 720 gateway. The Sputnik 720 is available as a wired-only gateway (switches and access points are used to create the wireless infrastructure) or as a gateway that has an integrated single or dual-band wireless access point (AP).

The Sputnik 720’s set of features, at first glance, doesn’t differ all that much from what a hotspot administrator can obtain from upgrading his own lower-priced router, such as the Linksys WRT54GL ($60), to a Sputnik-powered gateway. However, after taking a closer look, the 720 handles larger and busier public networks better than its less-expensive cousins. With its faster processor (266 MHz) and generous portion of memory (32 MB), the Sputnik 720 is designed to handle 100 or more concurrent authenticated users — as opposed to the estimated 30 users that the other routers can handle.

All Sputnik-powered routers run the open source DD-WRT firmware replacement, or a variant of it. DD-WRT is very popular among wireless administrators and has a solid reputation for being excellent firmware. In our experience — even running on less powerful routers — it is reliable. Another plus about running the DD-WRT firmware is that hotspot administrators can take advantage of its enterprise-level features to customize the Sputnik gateway and their overall hotspot solution.

The Sputnik 720 sets itself apart from other routers by shipping with a 5 dBi gain antenna to increase the coverage area. Most of the other supported routers have only factory or “rubber duck” antennas that don’t offer much gain. The router also supports Power over Ethernet (PoE), so hotspot administrators don’t have to run both power and Ethernet cables to the gateway, which simplifies and reduces the cost of deployment.

During our review of the Sputnik 720, we didn’t experience any noticeable performance issues. The gateway performed well with the few end users testing it out over several days. We didn’t have any problems, such as the ones seen in the Wi-Fi Planet review of an earlier Sputnik router (2004).

The SputnikNet service provides all the basic hotspot features and functionality one would expect, such as a customizable captive portal, payment options, and setting bandwidth limitations. We found it easy to remotely manage Sputnik gateways. Clicking on a gateway in the Control Panel lets the hotspot administrator change the SSID, channel and power settings. Additionally, QoS settings can be defined to limit the amount of bandwidth hotspot end-users can use.

We were hoping that Sputnik would go above-and-beyond similar hotspot solutions with its content filtering features. However, we found SputnikNet’s filtering options require the hotspot administrator to manually input the addresses he or she wishes to block, which isn’t a feasible method for blocking all inappropriate sites. A good content filter that would automatically block hotspot end users from visiting inappropriate sites would be a nice touch. We recommend the use of OpenDNS for third-party content filtering, which can be set up with Sputnik gateways.

For someone moderately experienced with setting up wireless networks, the installation and configuration of the Sputnik 720 is straightforward. The basic steps include plugging the gateway into an electrical outlet, hooking up the Internet cable, connecting to the gateway, and entering the Sputnik ID into the Web page that comes up and — voila! — its done. The gateway is then registered and the network administrator can configure and manage it through the online Sputnik Control Center.

Because a few topics that are lacking in the documentation, we can’t recommend the Sputnik 720 for Wi-Fi newbies. One item lacking from Sputnik’s extensive laundry list of installation documentation is a list of clear steps explaining how to run additional access points (or wireless routers) from the Sputnik 720 to increase coverage. Additionally, the documentation doesn’t explain how to configure the WAN port for non-DHCP connections, such as DSL or static Internet connections.

We found the customization of the captive portal to be clear using the online documentation. Our dash of HTML knowledge and basic Web page design experience, however, really came in handy when branding the captive portal. For hotspot administrators without HTML experience, it would be very helpful if Sputnik included a simple template-maker. Then, instead of having to customize the portal by editing the actual HTML and CSS code, hotspot administrators could choose to input their company info into a simple form that spits out a customized captive portal.

When shopping for your solution, keep in mind, though, that while the Sputnik 720 alone is priced under most traditional hotspot gateways, it also requires the fee-based SputnikNet service for full customization abilities. A Sputnik Agent Pro Subscription requires a one-time $49.95 set-up fee plus a whooping $499.50 annual fee per gateway (for the main gateway/router at each location).

Traditional hotspot gateways, although lacking the remote management features Sputnik provides, generally run $500 to $800 with no service fees. For those considering the Sputnik solution, the final decision comes down to whether or not having centralized monitoring and management of hotspot locations is worth the cost.

We found that the Sputnik 720 is a high-performance hotspot gateway that is customizable and easy to deploy. Although we found a few ways that Sputnik could improve its product, the Sputnik 720 and the SputnikNet service provide a great hotspot solution for medium to large-sized establishments.

Eric Geier is the Founder and President of Sky-Nets, Ltd., a Wi-Fi hotspot network. He is also the author of many networking and computing books, including Home Networking All-in-One Desk Reference for Dummies (Wiley 2008) and 100 Things You Need to Know about Microsoft Windows Vista (Que 2007).

This article was originally published on Wi-Fi Planet.