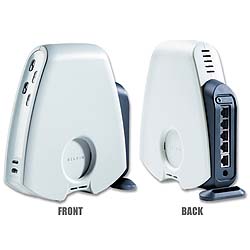 The Shape of Things to Come

In most small business environments network equipment typically gets little or no respect. During my days as a consultant I visited many offices where network hubs and modems were literally left lying ungracefully in the middle of a snake-like coil of CAT5 cables. The size of most routers — and just the simple fact that they’re not attractive to look at — is usually what condemns them to this type of causal mistreatment.

Belkin Components has introduced a new series of network switches and gateways that might bring a bit of respect to these often abused, but important products. In this case, it’s the Belkin 4-Port Cable/DSL Gateway Router.

The first thing you notice on the Belkin 4-Port Cable/DSL Gateway Router is its stylish design. Unlike a typical rectangular shaped network product, this unit is constructed of molded plastic and stands vertically (thus it’s small footprint) in an A-shaped design. Four large, easy to read link lights displayed in a staggered formation dominate the front. Connection speeds are easily identified by either a green or amber link light. Green indicates a 10Mbps connection and amber 100Mbps. From a distance you might think the Belkin router is an accessory to a Star Wars toy collection.

As the name implies, the Belkin allows users to quickly and easily share an existing Cable or DSL internet connection between multiple PCs. It makes use of a Web-based management system for configuration and administration duties. A 4-port 10/100Base-T switch is integrated into the Belkin. This combined with the built-in DHCP server makes configuring your workstations a simple affair.

As your network needs grow, additional Belkin products (such as the similarly shaped Belkin 5-Port Switch, model F5D51305) can be stacked onto the gateway router using the system’s unique docking ring. Throwing a few of these together will give you a quite a conversation piece.

Advanced features like Internet client filtering can also be enabled. This allows Internet resources to be filtered by IP address, granting certain users access to selected resources during a certain time of day. This is useful if for example you had wanted to prevent the guys in the mailroom from having cruising on the Internet during business hours.

Virtual server settings (a.k.a. port forwarding) are pretty straight forward and shouldn’t be too difficult for most users to configure. Unfortunately the Belkin also makes use of triggers which can be very confusing. The documentation doesn’t even address this feature so don’t expect any help there. If you’re not familiar with them, triggers work by having the router watch the outgoing data for a specific port number and protocol. The system records the IP address of the transmitting machine and then uses port-mapping to return the data through the firewall and back to the original machine that initiated the trigger.

In some circumstances an application just might not function properly behind a firewall. Examples of this could be seen with Microsoft’s Netmeeting or even streaming media. In this event you could use the Belkin’s DMZ (Demilitarized Zone) feature to bypass firewall protection for that system.

A security log monitors your system and keeps you informed of unauthorized attempts to gain access to your system. The only compliant I had with this setup however is that detection results can’t be e-mailed to the network administrator. The log can only be examined through the web interface. This really should be addressed at some point.

Installation of the Belkin into the network was remarkably simple. I connected our workstations into the unit’s 4-ports and booted up the PCs. To fine tune some of routers settings I pointed the Web browser to the unit’s default address of 192.168.1.2. After entering the default username and password, I was greeted by one of the best interfaces I’ve worked with to date. It’s simple, clean and easy to navigate. Most of the configuration options are pretty straight forward. Unfortunately, the DHCP page wouldn’t allow me to reserve any IP addresses. This means that if you needed to assign a static address to a server you would have to use an address that resides outside the current scope.

In this world of cookie cutter designs it’s nice to see a company break from the norm and not only offer an attractive product, but also a quite capable one. The Belkin’s firewall and user management features are very good, setup was a breeze and priced at around $100 you can’t go wrong. The limited downside: I would have liked to have seen some real VPN features built into the router and a bit more functionality in the DHCP settings would have also been appreciated.

If all you need however is a simple router that’s easy to configure and use then the Belkin Cable/DSL Gateway Router could be just the product you’ve been looking for.