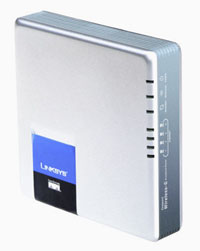 A quick glance at the Linksys Compact Wireless-G Broadband Router (WRT54GC) might lead you to believe that it’s a conveniently sized traveling companion designed to convert wired Internet connections on the road into personal hotspots. Closer examination reveals it to be less of a travel router and more of a typical broadband router for home use, albeit in a smaller and less cumbersome package.

The WRT54GC measures approximately 4 x 4 x 1 inches (HWD), which makes it roughly the thickness of, and slightly larger than, a deck of cards. On one side of the unit, you’ll find four RJ-45 LAN ports and a WAN port. There’s also a built-in stand that slides out perpendicular to the unit for use in vertical orientation (when not in use, the stand conceals the WRT54GC’s reset button). To maintain its compact shape, the WRT54GC uses an internal antenna, but one corner of the unit has a hidden panel that pivots out to reveal an SMA connector for an optional Linksys HGA7S high-gain antenna.

The WRT54GC takes a somewhat different tack than other miniature routers, such as the D-Link DWL-G730AP or the Netgear WGR101. For example, the WRT54GC isn’t quite as small as either of those competitors, and unlike them, it doesn’t include a carrying case. But it is the only one of the trio to include LAN ports to accommodate multiple wired and wireless devices.

The flip side is that the WRT54GC lacks the flexibility to function solely as a wireless access point or client adapter, which the D-Link product can.

For those unfamiliar with the process of connecting and configuring a broadband router, Linksys includes a setup wizard that makes it as easy as it can possibly be, providing graphic diagrams of cable connections and verifying connectivity by checking for the presence of an Internet connection.

Of course, if you prefer to configure the WRT54GC the old-fashioned way— via a Web browser interface— you can do that too. Those who have worked with Linksys products in the past will find themselves at home, since the administration interface is more or less the same. In fact, the WRT54GC provides countless features that are overkill for your typical hotel room usage scenario. It has extensive Internet access policies, including the capability to block or limit access to the Net by internal clients via URL or keyword, service or protocol port, and/or day and time. Like many other Linksys wireless routers, the WRT54GC supports VPN pass-through, and can also filter ActiveX, Java, cookies, and proxy servers.

The WRT54GC provides extensive logging capability, maintaining four distinct logs— incoming, outgoing, security, and DHCP— so you don’t have to sift through one mega-log to find particular types of entries. You can also output to syslog, but annoyingly, you have to specify an IP address in the syslog field even if you don’t plan to use syslog. Without specifying an address, you can’t enable even the internal log feature.

The WRT54GC provides the capability to perform both ping and traceroute tests from within the router, which eliminates the need to open up a command prompt window to troubleshoot connections. Another handy feature of the WRT54GC is the capability to assign clients static addresses out of the DHCP pool. This lets you use DHCP and still ensure that a client will always get a particular address— useful when configuring software firewalls.

The WRT54GC’s wireless radio can be configured in g-only, b-only, or mixed mode, but unlike many wireless routers, it can’t be disabled completely— a feature offered by most routers with wired ports. In addition to WEP and WPA, the WRT54GC also supports WPA2 (also known as 802.11i), which mandates the use of AES encryption rather than TKIP. Lacking any WPA2-compatible clients, I couldn’t make use of WPA2, but the WRT54GC offers a mixed mode for backward-compatibility, and WPA clients could connect to the router in this mode.

The WRT54GC’s lack of an external antenna didn’t seem to have a significant effect on performance, at least in my testing environment. Throughput tests conducted with Ixia QCheck (in g-only mode with WPA/TKIP encryption turned on) yielded between 17.5 and 19.5 Mbps at various points, which was essentially the same as an identically configured Linksys WRV54G.

If you’re looking for a mini-router to use primarily on the road in hotel rooms, conference rooms, and similar locales, the Linksys WRT54GC can get the job done, but not with quite the same convenience and flexibility as the D-Link or Netgear offerings. On the other hand, if you want a capable and full-featured router that simply takes up a bit less space in your home, the WRT54GC should leave you more than satisfied.