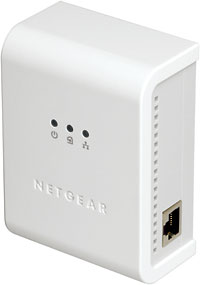 In the beginning there was HomePlug 1.0 — a technology for transmitting data across household electrical wiring — and it was good. Then again, with a maximum speed of only 14 MB/sec., and only about half of that delivered in real-world performance, it was good mainly for undemanding chores such as Web browsing and e-mail.

But for tasks such as transferring large files or streaming high-quality video it wasn’t nearly good enough, so along came a new generation of HomePlug 1.0 Turbo products that boasted speeds of up to 85 MB/sec. These products — like the Netgear XE104 Wall Plugged Ethernet Switch we reviewed in April — held much promise, but instead of the implied six-fold improvement, the performance increase over earlier devices turned out to be far more modest. In most cases, this turned out to be about between 10 and 15 MB/sec, still not up to the most demanding tasks.

In what is perhaps an admission of how lackluster the XE104’s performance could be (as is the case with other HomePlug 1.0 Turbo products, for that matter), Netgear is taking another stab at the problem with a new powerline product called the HDX101. The HDX101 ups the ante by claiming a theoretical maximum bandwidth of 200 MB/sec, with real-world throughput of around of 80 MB/sec, and the HD in the product name is no accident, for Netgear purports the HDX101’s level of performance permits the streaming of high-definition video.

At first glance, the HDX101 looks almost identical to the XE104 (both are wall wart-style devices), but much has changed both inside and out. The HDX101 has but a single Ethernet port (compared to four on the XE104), so it can accommodate only one directly-attached device (either a LAN switch or a single client device). Also new are the HXD101’s innards, which contain a chipset from Design of Systems on Silicon (DS2) rather than from Intellon, the firm that made the chipset in all previous HomePlug products.

In fact, the HXD101 is not actually a HomePlug-compliant device. The HDX101 can coexist on the same electrical wiring with earlier HomePlug 1.0 and Turbo products, but not without a performance penalty. Moreover, the two technologies aren’t interoperable, so if you’re already using some HomePlug devices and want everything on the same network you’ll need to replace them with HXD101 units. No matter how many HDX101s you require, it’s an expensive way to network devices — the HDX101 costs $129.99 (MSRP) compared to $99.99 for the XE104. (Since you need at least two powerline adapters to create a network, Netgear offers a two-pack kit for a modest discount of $249.99.)

Happily, the HDX101 itself is not OS-aware, so it’s compatible with any device that has an an Ethernet port (including MacOS and Linux systems). Like its predecessors, the HDX101 is easy to set up — you need only plug your units into power, connect one to a router and others to the devices you want to network, and within several seconds they connect to the LAN, to each other, and are ready to roll. A configuration utility is included, but you don’t need to run it unless you want to change the powerline network’s default security password. Changing the password is a good idea, though, because like previous powerline products the HDX101 uses a custom shared password to encrypt communication between devices, which prevents a neighbor with similar equipment (configured with the default password) from joining your network. (The signal goes through circuit breakers and only halts at the transformer, which is usually shared by multiple houses.)

You can configure the HDX101 via the utility to give priority to either TCP or UDP traffic on congested networks (UDP traffic, used in streaming media, is prioritized by default) or to prioritize traffic on custom network ports that you specify. You can also use the utility to check the general connection quality of your powerline network — each HDX101 device reports figures for both transmit and receive signal strength, and in our case it reported one device as having an optimal connection (200 MB/sec transmit/200 receive) while the other wasn’t quite as good (131 transmit/142 receive).

Since the utility works only with Windows 2000/XP, at least one system on your network must be running either OS if you want to change any of the HDX101’s default security or performance settings.

To see whether the HDX101 could indeed perform faster than a HomePlug 1.0 Turbo device, we chose a pair of outlets and conducted a series of tests comparing it to the XE104. We plugged one HDX101 directly into a Netgear WPN824 router, another into a PC running Windows XP, ran each test several times, and then repeated the tests after swapping the HDX101s for XE104s. We didn’t plug any of the powerline adapters into UPS devices, power strips, or extension cords since they can severely degrade the signal or even prevent a connection entirely.

We started with a large file transfer between a Maxtor NAS hard drive and a Windows XP client system. Transferring the 1.2 GB file took 13:47 (minutes:seconds) with the HDX101. That was faster than the XE104’s transfer time of 18:36, but not by a huge margin. Since many prospective users will likely be interested in the HDX101 for use with a DVR like a TiVo, we also timed the transfer of a 30-minute recorded program from a TiVo Series 2 to TiVo Desktop software running on a PC. Transferring the 1.5 GB file with the HDX101 took a whopping 79 minutes, and only slightly longer on the XE104 (87 minutes). Of course, most TiVo units transfer data via a USB port (we used a wired USB to Ethernet adapter), which seems to be a bottleneck that prevents swift data transfers. Dual-tuner TiVo units have Ethernet ports which should provide better performance no matter what network medium (802.11, Ethernet, powerline) you use.

We next tried to stream a HD-quality video clip (1:43 in length with a resolution of 1440 x 1080 pixels and a bit rate of almost 8.5 MB/sec) from the NAS device. Alas, the HDX101 couldn’t successfully stream the file — although the audio track was pristine, the video was extremely choppy. Streaming the video on the XE104 was even worse though, as the visuals were reduced to a series of still frames and most of the audio was dropped.

We tried streaming the same content again but this time using a clip with a lower resolution and bit rate (1280 x 720 and 6.5 MB/sec) and it streamed without any problems on both the HDX101 and the XE104. We then tried streaming the same two clips from a Media Center PC to an Xbox 360 game console, and in this case, both the lower- and higher-resolution HD clips streamed properly on the HDX101.

Finally, we ran several tests using the network performance utility iPerf. With the HDX101, it reported an average of 18.5 MB/sec compared to 13.1 with the XE104. That’s certainly an improvement, but hardly an overwhelming one. When we configured iPerf to use a larger 128 K TCP window size (the amount of data a system can receive over the network before sending an acknowledgment) than the Windows default of 8K, the HDX101 turned in a much higher score of 48.6, more than triple the XE104’s score of 15.7. This suggests that at least for file transfers (which generate TCP traffic, as opposed to streaming which uses UDP) permanently modifying the setting in the Windows Registry might take better advantage of the HDX101, for those willing and able to make the adjustment.

As with any powerline device, the quality of the connection between HDX101 devices can and almost always does vary — sometimes greatly — from outlet to outlet (as well as when a device that pulls a lot of current — like a vacuum, hair dryer, iron, or microwave oven — are active on the same electrical circuit). The configuration utility reported vastly different connection quality figures as we moved the HDX101 units around our four-year-old house, most of which were lower than what was reported during our series of tests.

Of course, while the average home contains many electrical circuits and dozens of outlets, the location of the device you want to network may dictate which outlet you can use. Unless you’re able to relocate a device, the outlets you need to use may not necessarily be the ones that provide the best performance.

It seems clear that under the right circumstances the HDX101 can offer better performance than previous powerline solutions, but the problem is that realizing the best performance out of it involves more than simply plugging it in and being done with it. In most cases, the outlet it’s plugged into, the devices you use, and even your Windows network settings can all affect (read: limit) your performance.

The bottom line is that there’s really no way to find out how fast the HDX101 will be in a given situation until you “buy and try” it yourself, and chances are you’ll need to engage in a fair amount of tweaking and trial and error to get maximum performance out of the HDX101. If performance is paramount then the experimentation will likely be worth it. But if you want a powerline network and peformance isn’t your primary concern, a HomePlug 1.0 or Turbo device will be an easier and less expensive route to take.

Joe Moran is a regular contributor to PracticallyNetworked.com.