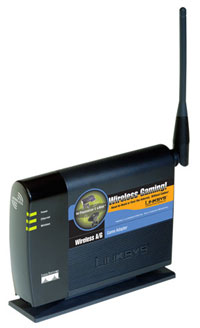 At first glance, Linksys WGA54AG Wireless A/G Game Adapter looks like little more than a version of its previous WGA54G (albeit with the addition of 802.11a compatibility). That’s arguably the biggest difference, but it’s not the only one.

The WGA54AG looks almost identical to its 802.11g-only predecessor, with the only physical differences being labeling, a slightly different look to the antenna, and the addition of a toggle to switch between ad-hoc and infrastructure mode.

There are several ways to get the WGA54AG up and running, and they range from easy to brain-dead easy. Linksys includes a setup wizard, but the WGA54AG is set for “any” SSID and no encryption by default, so if your WLAN is broadcasting its SSID and is unencrypted, you needn’t even bother with the wizard.

Otherwise, the Linksys setup wizard makes things quite simple, since it automatically locates the device and takes you through essential settings like defining ad-hoc or infrastructure mode, SSID and encryption (separate for A and G operation). Sadly, WEP is the sole encryption option in any mode.

You can use the wizard to define basic IP information like address, subnet, and gateway, but to facilitate access via Web-based administration you must initially define a static IP (or use the default of 192.168.1.250). Once you’ve accessed the device through the browser, you can reconfigure the WAG54G as a DHCP client.

If you’re using the WGA54AG with an Xbox console as I did, then you needn’t concern yourself with the either the setup wizard or Web-based configuration. Most any wireless-to-Ethernet bridge is technically compatible with Xbox, but this product carries the “Xbox Live Compatible” logo. It’s more than simply marketing fluff. It essentially means that you can configure the WGA54AG directly via the Xbox on-screen dashboard, something that has heretofore been possible only with Microsoft’s own MN-740 802.11g adapter. (It also means that Microsoft will talk to you if you ever contact them for Xbox Live technical support.)

I tried configuring the WGA54AG via all three methods, and it worked like a champ on the first try each time. There were a couple of issues I discovered that didn’t affect the function of the WGA54AG but were nevertheless annoying.

For head-to-head gamers that need to configure the WGA54AG in ad-hoc mode, the 3-position toggle switch lets you easily set the device in a or b/g mode, as long as you aren’t using encryption or a specific SSID. This won’t work if the other gamer has a WGA54AG however, since the identical IP addresses will cause a conflict. The setup wizard has a special mode that will quickly configure a pair of WGA54AGs going ad-hoc with default settings but still use different IP addresses.

Gamers planning to regularly use the same WGA54AG in both ad-hoc and infrastructure mode will be interested to know that the unit doesn’t seem to retain separate configuration settings (i.e. SSID and WEP key for the two modes). Therefore, unless you’re using default settings or the same SSID and WEP key for both modes, you’ll need to reconfigure the WGA54AG each time you switch modes.

There were a couple of other minor issues with the WGA54AG that were irksome, though they admittedly didn’t affect the unit’s function. One was that despite multiple attempts, I couldn’t successfully update the unit’s firmware. Although the WAG54AG recognized the updated firmware file from the Linksys Web site and seemed to go through the motions of the upgrade process, when all was said and done the firmware version had not changed. (Or at the very least, the WGA54AG failed to report the new version.)

WAG54AG’s online help page provides a convenient FTP link to the product manual on the Linksys site, but it’s to the wrong product— it brings up the documentation for the older WAG54G model. Fortunately, the correct manual is included on the product CD, not that most users are likely to need it.

You’ll pay about $20 or $30 more for the WGA54AG than for Linksys’ 11g-only WGA54G, and since that extra scratch gets you not only dual-band band compatibility and easier ad-hoc configuration the slight price premium seems justified. Xbox owners in particular will find stepping up to the WGA54AG worthwhile, even if an 802.11a network or head-to-head gaming aren’t in the offing.

Since wireless consumer electronics devices are probably destined to move to the 5GHz 802.11a frequency anyway (more channels mean less potential for interference with neighbors) at the very least, with the WGA54AG you’ll have all your bases covered.