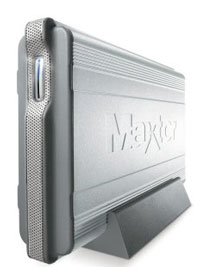 If you don’t back up your computer regularly, then it’s a safe bet that you’ve never experienced the horror of a hard drive crash or similarly catastrophic event that indiscriminately massacres application and data alike. If you do perform regular backups, you know that backing up to old-fashioned tape makes tectonic shift look fast by comparison.

Conversely, the limited capacities of CD-R and even DVD-R discs make backing up a lot more work than it needs to be. No, an external hard drive is the way to go for anyone who wants backups done quickly and reliably, and Maxtor’s One Touch II external hard drive promises to make system backups fast and easy with little to no attention from you.

Drive By Features
Like its predecessor, the One Touch II features a handsome and rugged aluminum enclosure with a single illuminated button on its face. The unit’s internal fan helps keep things cool, but you won’t hear it over the ambient noise in the typical room. You’re not likely to hear the drive itself, since it’s barely audible except during intense activity when you can hear muffled clicking.

You can place the OneTouch II flat on a desk or set it up vertically using the included stand. One drive comes in either 250GB or 300 GB capacities, and we tested the latter. Both models come with a large 16 MB of cache and rotate at 7200 RPM.

Like most of the newer external hard drives (particularly the higher-end models), the OneTouch II comes with both USB and Firewire interfaces — including the cables for each. (Printer vendors, take note.) One caveat though — if your PC has the compact four-pin FireWire port found on almost all notebooks and many desktops, you’ll need to purchase an adapter.

Driven To Improve
The One Touch II drive incorporates several hardware and software improvements over its previous line of drives, including faster rotation and increased cache (the prior 300 GB drive was a 5400 RPM device with a mere 2 MB cache). Another significant enhancement is Maxtor’s DriveLock, which is designed to protect the drive’s contents from unauthorized access in the event that the drive is loss or stolen. (The drive also accommodates a locking security cable in an attempt to thwart pilfering.)

DriveLock doesn’t actually encrypt the drive contents, which is probably a good thing since doing so would take an extremely long time — even if the drive were only partially full. Instead, the drive simply makes the partition inaccessible (and invisible) until you enter the correct password.

When secured, the drive shows up in My Computer, but only under the “Other” heading with the label “Maxtor Locked Drive”. If you want to use DriveLock and also plan to tote the drive to multiple computers, you must first install the Maxtor utility software on each machine.

It’s Best When Backing Up
Although you can use OneTouch II as supplemental storage, the real value is in using it to backup your computer regularly. And just as an automobile is nothing without a driver, the OneTouch II drive’s usefulness comes from its bundled software, specifically the Dantz Retrospect Express HD backup utility.

You can use this utility in one of two ways. The “Duplicate” mode lets you automatically make redundant copies of your data files, selected either by location or by type. Comprehensive Backup — our preferred approach — involves backing up the whole shebang (applications, operating system, and so forth). This latter method also has the added benefit of giving you multiple historical versions of your data (restore points), since Duplicate mode only retains the most recent version of a file.

In any case, the software makes it exceedingly simple to select the backup method you want, specify the data to backup and schedule the backups to occur automatically in just a couple of mouse clicks. If that’s still too much mouse movement for you, the software will automatically backup each local drive to the OneTouch II by default.

Although it can be emotionally satisfying to press the OneTouch II’s button to start a backup, scheduling automatic backups is the way to go. Just so the button (and the feeling) doesn’t go to waste, you can reprogram it to launch the application of your choice.

Booting from the OneTouch isn’t possible with Windows due to limitations of the PC platform. Therefore, to restore from a catastrophic failure in Windows, you must first re-install the Windows operating system, service packs and the Maxtor software (which can take quite some time). One improvement we’d like to see added to the Retrospect software is the ability to boot off a floppy disk to perform a restore directly off the USB device (a feature found in Symantec’s Norton Ghost software), which would erase the need for any system preparation.