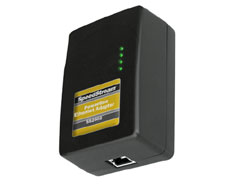 Like most HomePlug products, the Speedstream SS2205 Powerline to Ethernet Adapter shares many things in common with its competitors. It has a speed rating of 14 Mbps, supports 56-bit DES encryption for security and privacy, and is compatible with the HomePlug 1.0 specification. That being the case, it looks like Siemens is seeking to differentiate itself in product design, as it is the only HomePlug adapter out of the four I’ve looked at that is a self-contained unit that plugs directly into the wall — no power cord needed.

This form factor is great for any place where desk space is at a premium. Since any HomePlug device is going to plug into a power outlet anyway, why not put everything into a compact brick format? The device measures about 3″ long, 2″ wide, and 1″ thick, and all of the requisite indicator lights reside on the front of the unit (though admittedly, you’re not likely to be able to see them from where you’re sitting). The bottom of the device sports the RJ-45 port.

Installation of the SpeedStream adapters was quick and painless — because they’re bridge devices, no drivers are necessary. It would be nice if the product came with a CAT5 Ethernet cable longer than 3 ft. The fact that the adapter hugs the wall probably necessitates at least a 6 or 7 foot cable, in my opinion.

Another differentiating feature is the software that comes with the SpeedStream. Whereas many HomePlug products come with no software or minimalist applications that do little more than let you specify a password, the SS2502 comes with a useful configuration utility that reports the link quality and an approximate throughput level of your Powerline network (as well as letting you set the encryption password). The SpeedStream software is compatible with any version of Windows beginning with Windows 98 SE, but it’s not compatible with the MacOS.

To test performance, I linked two notebooks together using the SS2502 Ethernet adapters (a USB version is also available). The computers were several rooms apart (about 40 feet and on the same floor) and were plugged directly into wall outlets rather than surge protectors. Like most vendors, SpeedStream reminded me that surge protectors could hider performance and aren’t even necessary since surge protector technology is integrated into each unit. In the event of a power surge, the SS2502 will take a bullet, but the computer it’s connected to will remain unmolested.

The performance of the SS2502 was almost as good as any HomePlug product I’ve seen to date. With TCP throughput rates of 5.6 Mbps and UDP throughput of 4.6 Mbps, it was just about on par with the equivalent Netgear HomePlug adapter, which provided only slightly better performance. Response time and streaming performance were excellent as well.

Even though the chances of encountering problems either during installation or afterwards are probably remote, it’s worth noting that SpeedStream provides a toll free technical support line. Also, the product is covered by a one year warranty, which SpeedStream will double if you take the time to register the product with them.

Of course, to set up a HomePlug network or add a HomePlug segment to an existing wired or wireless network, you need at least two Powerline adapters. However, SpeedStream is now offering routers and WLAN access points that incorporate HomePlug devices, potentially making them excellent companion products for this adapter.

The intelligent space-saving design of the SpeedStream SS2502, along with its impressive performance, make it one of the most compelling cases yet for utilizing a Powerline network. And, with a $99 price tag and a high ease-of-use quotient, you’ll have a difficult time finding a better HomePlug product.