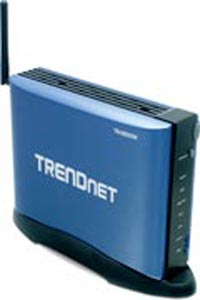 It’s no secret that a Network Attached Storage (NAS) device can be a quick and easy way to add sharable storage to a network. If you’re in the market for a NAS device there are myriad ready-to-use products to choose from, but those who prefer to roll their own NAS can consider a device like the TRENDnet TS-I300W Wireless Network Attached Storage Enclosure, a $199 (MSRP) drive enclosure to which you add your own hard drive.

There are a couple of reasons you might choose a product like the TS-I300W over a ready-made NAS. One is cost — NAS devices can often be pricey, and if you have an unused hard drive lying around the TS-I300W can help you put it to good use and save some cash. You may also want a NAS device that has built-in wireless support — relatively few NAS devices do today — rather than one that depends on a wired connection to a wireless router or access point. (The TS-I300 supports 802.11g/b.)

Getting a hard drive into the TS-I300W was pretty easy, but trying to configure the unit proved more of a challenge. This was mainly due to an interface that was often perplexing, but the TS-I300W also suffers from half-baked folder management and security features that essentially negate any real data protection (at least for the time being).

The TS-I300W can internally accommodate a single 3.5-inch hard drive. If you’re looking for the enhanced performance or redundancy afforded by a pair of drives in a RAID configuration, look elsewhere. The TS-I300W is designed for drives that use the older Parallel ATA (ATA/IDE) type interface, not the newer Serial ATA (SATA) units now standard in most PCs. Fortunately, Parallel ATA drives remain plentiful and relatively cheap. TRENDnet doesn’t publish a list of specific drive models that are compatible with the TS-I300W, but claims that it should work with any drive with an ATA/133 interface or below. I used an 80 GB Western Digital WD800 without any problems.

Getting your hard drive into the TS-I300W isn’t much different from installing it in a PC. If anything its a bit easier, given how hard it can be to work inside cramped system cases. You start by removing the side panel via two small screws on the rear of the TS-I300W. Inside the chassis sits a metal drive bracket to which you fasten your drive using four included mounting screws. There are pass-through holes on each edge of the unit to accommodate a screwdriver, so securing the drive is fairly easy– I had a drive installed and the cover replaced in about five minutes.

To keep the drive from getting too toasty, the TS-I300W has a small internal fan and venting holes along the top and bottom edges of the device. (It ran cool and quiet in my tests.) You get a plastic base to hold the TS-I300W in a vertical orientation, and though you could probably use it in a horizontal orientation instead, there aren’t any rubber feet on the broad sides of the unit to keep it from sliding around.

On the back of the TS-I300W you’ll find a 10/100 Mbps Ethernet port along with a USB port that can accommodate an expansion storage in the form of an external hard disk, CD/DVD, or Flash memory drive. For convenience, there’s a second USB port available up front along with a bank of status LEDs.

TRENDnet includes a Windows-based “Easy Search” utility to locate and change basic configuration info on the TS-I300W (such as IP address, host, and workgroup name). You can then access the device’s browser-based configuration interface, from which you can format your newly-installed drive. Internal drives must be formatted with the Linux-based EXT2 file system, which means that you won’t be able to transplant the drive into a Windows PC and access the data if needed (at least not without third-party software). Externally connected storage devices can be accessed in their native format, but you can’t write data to NTFS-formatted devices, only read from them. The TS-I300W provides its own disk-scanning function, but it doesn’t offer a defrag tool.

The TS-I300W ships with its wireless radio disabled, so you must turn it on before trying to connect to a WLAN. The TS-I300W can also be configured to act as an access point.

Repeated attempts to add the TS-I300W to my existing 802.11g network (courtesy of a Netgear RangeMax WPN824 router) proved unsuccessful. Although I’ve occasionally encountered issues getting WPA or even DHCP to work properly between products of different vendors, the TRENDnet and Netgear devices simply refused to communicate even when I disabled encryption along with every performance and range-enhancing feature on the router. Fortunately, I  had better luck with a Linksys WRT54GS, which I quickly paired with the TS-I300W, even with WPA.

Much of the TS-I300W’s interface is straightforward, but there are also several feature descriptions and menu options that are confusing to say the least. Unfortunately, a poorly written (or more likely, translated) manual doesn’t do much to help matters.

When you run the TS-I300W in its default “open” mode, unrestricted drive access is offered to all comers. You can also opt to create up to 50 user accounts on the device, but you can’t create groups or import existing user data from Active Directory or an NT Domain. Interestingly, the TS-I300W requires the use of a password with any user account you set up, and it also enforces that that it be at least five characters in length.

The aforementioned folder management and security problems clearly become evident: there’s no way to set up new folders from within the TS-I300W’s interface. Rather, you must instead create them from your computer (e.g. Network Places in Windows) and within the device’s root folder. You can then assign rights to each folder you’ve created by using an “Add Session” feature (“session” seems like odd terminology — told you it was confusing; see image below). This creates an independent network share for the new folder– one that will prompt for credentials when access is attempted. You can define a user’s access to a folder as read only or read/write, but you can’t add more than one specific user to a folder — it’s either a single user, or everyone.

The upshot of all of this is that since the TS-I300W’s root folder is a default public share and any folders you create are located there, all your folders are always available without restrictions by drilling down through the public share (as opposed to using the individual folder shares). I tried to close this back door by removing the “session” that defines the root public share, but the TS-I300W wouldn’t allow it. Even if it did, it would eliminate the capability to create any more folders, since the public share would no longer be accessible. When pointed out to TRENDnet, it acknowledged the problem and said it would be addressed in a future firmware update (my test unit used version 1.10.0619) Until that happens (no time frame was given), the TS-I300W isn’t the place for any data you want to keep private.

In spite of the security woes, the TS-I300W includes a couple of potentially useful features you won’t find in most NAS products. One is a built-in FTP server that you can use to get remote access to your files (or grant it to others). You can put limits on the number of concurrent users as well as how fast they can download data (in increments of 10Kb per second) to help prevent too much of a drain on your upstream bandwidth.

If you’re the type that downloads large files from the Web on a regular basis, you may  appreciate the TS-I300W’s download scheduling feature (below), which lets you set up file downloads (either FTP or HTTP) so they can take place unattended.

Even if you don’t need security and are inclined to overlook the product’s shortcomings in that and other areas, a TRENDnet IS-I300W probably makes sense only when you really, REALLY want either the wireless, FTP, or download scheduling features or you’ve already got an idle hard drive available. As it turns out, there seems to be little to no money to be saved when buying a hard drive to pair with the TS-I300W — in an informal search of online vendors I found that in most cases the cost of a TS-I300W plus an internal hard drive was about the same as what you’d pay for a ready made NAS of the same capacity.