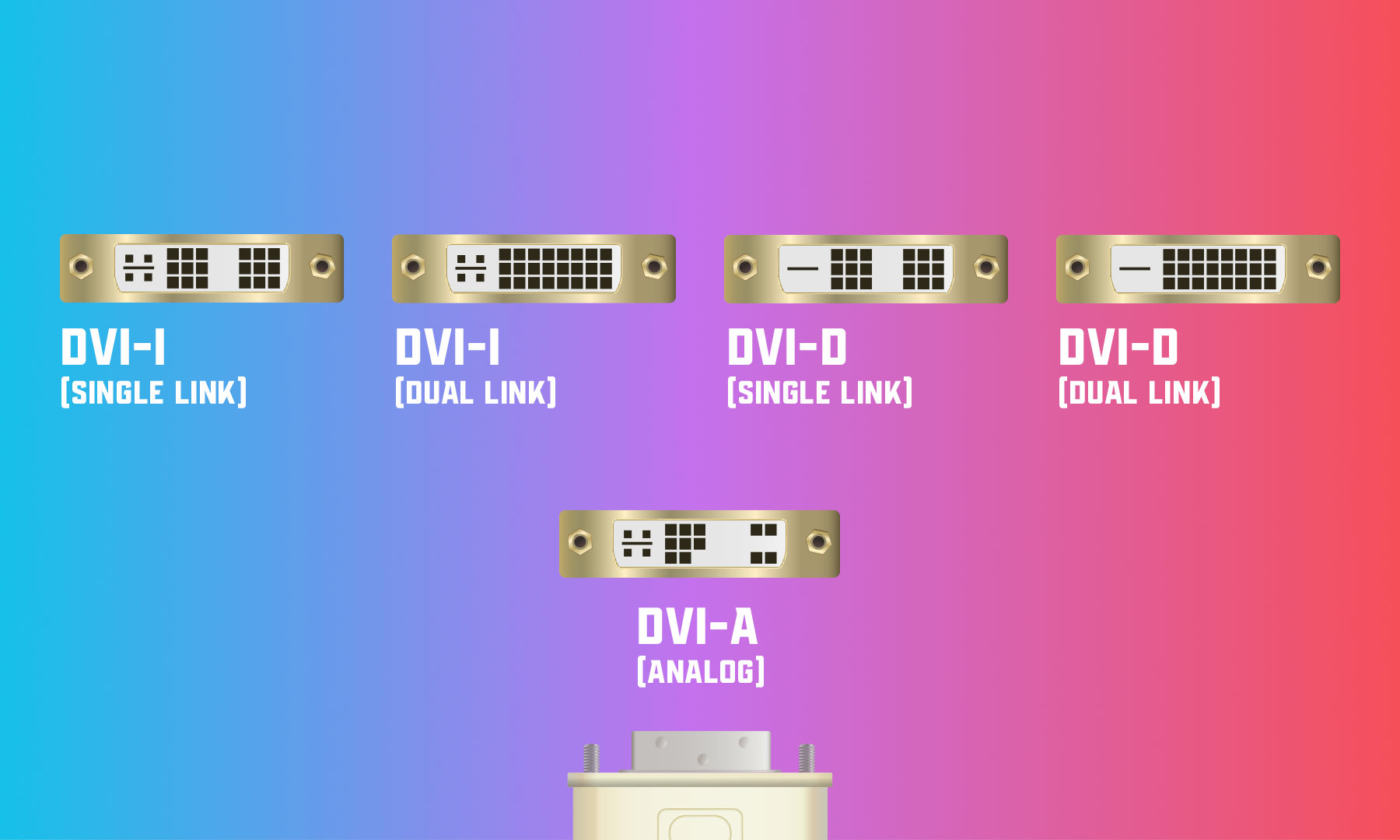 If you’ve bought a computer monitor in the last two decades, chances are good you have a basic understanding of DVI technology. While you may know how to plug a DVI cable from your graphics card to your monitor, what you might not know is that not all DVI cables are created equal.

There are at least three different variations between DVI cables, such as DVI-I, DVI-D and even DVI-A, each with their specific purpose.

DVI, which stands for Digital Visual Interface, was first introduced in 1999 by the Digital Display Working Group, also known as the DDWG.

The primary purpose of the DVI cable was to create a standard computer interface that all monitors and graphics cards could share in an attempt to streamline the computer installation process for both businesses and consumers alike.

As a secondary feature, a DVI cable maximizes the quality of flat panel LCD monitors, which were just starting to become mainstream when DDWG introduced the DVI cable.

The DVI cable was a successor to the VESA Plug and Display standard, and in only a short matter of time the DVI cable became the standard cable for use with computer monitors. While you’ll most likely find DVI cables running from a computer case to a monitor, you’ll also find DVI cables used with game consoles, DVD players and even television sets.

The easiest way to tell if you’re looking at a DVI cable is the unique structure of the cable itself; unlike other cables, DVI cables include two screws on either side of the pins to ensure a firm connection at all times. When properly screwed in, it’s almost impossible to remove a DVI cable.

One of the benefits of the DVI cable that quickly increased its popularity was the length of the cable itself. The average DVI cable length is around 15 feet long, which gives you enough length to set your monitor far from your PC case if you so desire. While DVI cables longer than 15 feet exist, most PC users do not use them as it causes a drop in quality.

One of the downsides of the DVI cable is its maximum resolution; on average, a DVI cable is only capable of outputting to screen resolutions as high as 1920×1200. This wasn’t an issue as 1999, as this resolution was barely in use; however, in today’s world where 4K resolutions are becoming more common, this limitation is starting to see consumers embrace the HDMI cable as the new standard.

What’s the Difference Between DVI-I and DVI-D?

The difference between DVI-I and DVI-D cables is in the letters used in the name: the I stands for integrated while the D stands for digital.

DVI-D cables are the most common form of DVI cable available and are frequently packed in with computer monitors. DVI-D cables create a direct digital connection from the source to the display, which is usually the graphics card in your PC and an LCD or LED screen, respectively.

A DVI-I cable functions similar to a DVI-D cable but with one added benefit: A DVI-I cable can read both digital and analog signals. However, the one drawback is that this cable can only transmit signals of the same type, such as a digital-to-digital signal or an analog-to-analog signal; it’s not possible to transmit an analog-to-digital signal without special conversion equipment. While most monitors and other computer hardware usually do not include a DVI-I cable, they are readily available at most electronics stores and online retailers.

Unbeknownst to all but stalwart PC enthusiasts is a third type of DVI cable, the DVI-A cable. As you likely already guessed, the A in the name DVI-A stands for analog, and this cable is strictly an analog-to-analog cable.

The primary purpose of this cable is to provide a high-resolution image to non-digital sources, such as an old CRT monitor. You’ll commonly find the DVI-A cable used with a VGA device to confer some of the benefits of the DVI cable onto older technology.

How Can I Tell the Cables Apart?

When looking at all three cables side-by-side, at first glance, it may seem impossible to tell them apart. All three DVI cables are likely the same color, all sport the same design and even the same cable thickness. The secret to telling the three cables apart is by looking at the pins on the inside of the connector.

The DVI-D cable is the easiest to figure out, as this cable has two sets of nine pins on the right side and a single horizontal blade on the left side of the connector.

The DVI-D cable is the only DVI cable to use this setup, making it easy to know if you have a DVI-D cable within the first few seconds of looking at it.

However, attempting to determine the difference between a DVI-I and a DVI-A cable is where things get tricky.

A DVI-I cable has two sets of nine pins in the connector, similar to a DVI-D cable. On the far left side of the connector, there is a horizontal blade with two pins above and below it.

On the DVI-A connector, you have the same pattern and placement of the flat blade and pins, but rather than two sets of nine pins on the right side you have one set of eight pins followed by one set of four pins.

When To Use Each Cable

In many cases, knowing when to use each DVI cable depends on the type of connections found on your hardware. The quickest way to know which cable to use is by checking the female DVI plugs. If at least one source uses a DVI-D connection, you’re going to need a DVI-D cable, and if at least one source uses a DVI-A connection, then you need a DVI-A cable. If both connections use a DVI-I plug, then you can use any of the three DVI cables, through experts recommend you stick with a DVI-I cable for the best possible picture. As previously mentioned in this article, if one connection is DVI and the other is analog, you cannot use any DVI cable without the proper conversion equipment.

Whenever possible, opt for a DVI-I cable, as this cable will give you the most flexibility and best picture quality. Whether you’re working with an analog or digital source, a DVI-I cable will provide you with the most options and ensure that, at the end of the day, you’re going to have a picture on your display. While it’s initially somewhat tricky telling the difference between a DVI-I and DVI-D cable, just keep this guide handy: In no time at all, you’ll have no problem determining which DVI cable is which and the perfect DVI cable for any given situation.