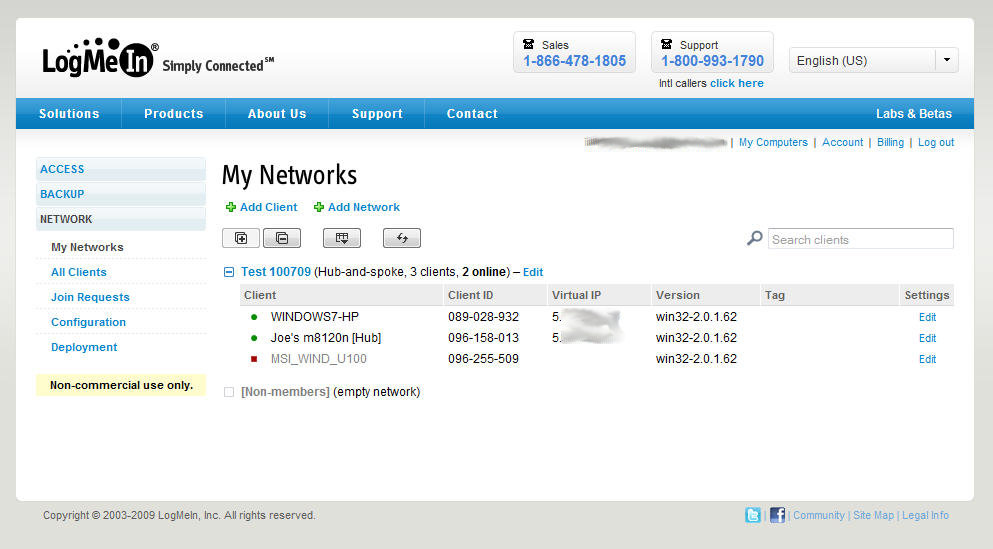 Cons: Windows only; commercial version much pricier than predecessor

Ever since it debuted as a beta over three years ago, Hamachi (subsequently purchased by LogMeIn) has provided a quick, easy, and usually free way to set up secure VPN connections between distant systems without any special hardware or much in the way of firewall/NAT-related configuration hassles. Hamachi2, the first major update to the software, retains most of the the characteristics that made the original so popular while offering an enhancements like a refreshed user interface, additional network topology options, and the ability to create and manage networks remotely.

Hamachi2 is compatible with all versions of Windows from 2000 through Windows 7, including Windows Server 200x. (We tested it with a mix of XP, Vista, and Windows 7 clients.) While Hamachi 1.0 included Mac and Linux — albeit command line only—versions, Hamachi2 is Windows only, at least for the time being. The software is downloadable here;  access to centralized network management as well as topologies beyond the standard mesh requires creating a LogMeIn account, but you can register a free one for Hamachi without being a subscriber to one of the company’s myriad other services.

Like its predecessor, Hamachi2 isn’t autonomous VPN software, but rather a hosted VPN service. LogMeIn maintains servers to authenticate systems mediate secure links (256-bit AES encrypted) between Hamachi network members, which is what helps make it relatively adept at fire/NAT traversal. Data, on the other hand, is transmitted directly over secure links between clients, except in certain cases—LogMeIn says roughly 5 percent– where direct connections can’t be established and data must instead be relayed by the mediation servers.

When using Hamachi2 sans a LogMeIn account, the software works much like the prior version did save for the reworked interface. The UI is still Spartan, but it’s also cleaner and more logically organized than before—configuration options are available via a conventional tabbed interface instead of behind tiny buttons. Installing Hamachi2 sets up a virtual network adapter, which you can then use to create a secure mesh network (via the 5.x.x.x IP address space) with little more than a few clicks and creating unique network name and common password. In this scenario, all network configuration chores are handled directly through the Hamachi software.

(Note to Hamachi 1.0 users: the built-in update feature will not report the existence Hamachi 2, but if you manually install the latter over the former existing networks and configuration settings are retained.)

Using Hamachi with a LogMeIn account really kicks the software’s capabilities up a notch, starting with the ability to administer your network(s) from anywhere, and create networks other than the standard mesh topology (where all network nodes are linked to all others). By using the LogMeIn Web site to create a network rather than the Hamachi software itself, you can set up hub-and-spoke networks for greater control over connections– nodes (the spokes) link only to those designated as hubs, and not to each other. You can also opt for a gateway topology, which uses your LAN’s IP addressing scheme rather than the dedicated 5.x.x.x range. This makes it possible to access networked resources beyond just those on the system running the Hamachi software, though for security reasons, you can’t use a workstation that’s a member of a domain as a Hamachi gateway.

Upon setting up a network you can install the Hamachi software directly to the local system, or set up network members remotely by creating customized links (for delivery over e-mail or other means) that will automatically download the Hamachi software and join a specific network. Other centralized management options include the ability to prevent nodes from leaving the network and to disable configuration options in the Hamachi software UI so network members can’t create or join their own Hamachi networks. Irrespective of the network type, Hamachi networks are limited to 16 members, though systems can be members of multiple networks (unless it’s a gateway, in which case it’s limited to one).

Like its predecessor, Hamachi2 remains free for personal and non-commercial use. On the other hand, the commercial license version (which supports networks with 256 members instead of just 16) is now $199 for a one-year subscription, compared to just $39.95 for Hamachi 1.x. (That works out to more than $16 a month.) There’s also a whopping $33 month-to-month payment option, which is only cost-effective only if you need five months of service or less.

Hamachi’s long been an excellent way to set up quick secure links on an as-needed basis for casual purposes like gaming, and media streaming. Notwithstanding the fivefold price hike for the commercial version, Hamachi2‘s additional network options and centralized management now make it a viable option for small businesses that want to set up a VPN for remote access, etc. while keeping the expense and technical headaches to a minimum.