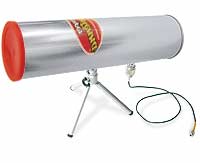 It turns out the cylindrical shape and metallic lining of a Pringles container give it a knack for transmitting RF signals. Yet despite the availability of such a component at your corner market, constructing a functional and effective antenna around one does require a certain amount of effort and even engineering knowledge.

For those looking for an easier or perhaps lower carb alternative, a company called Wireless Garden offers us the $19.95 Super Cantenna, which lets you put the “Pringles Principle” to work for you with a minimum of effort and expense.

Lest you think this is nothing more than someone’s clever scheme to make millions consuming salty snacks by the truckload, you should be aware that the Super Cantenna isn’t actually a Pringles can. While the food container is constructed primarily of foil-lined cardboard with a metal base, the Super Cantenna cylinder is actually constructed entirely of metal. It is also slightly wider and longer than a Pringles can. To protect the antenna lead inside the can, or perhaps to facilitate chip storage — or perhaps to look more Pringle-esque — the Super Cantenna also sports a plastic lid.

Before buying the Super Cantenna, you’ll want to verify that your wireless equipment has a removable antenna (not all do, unfortunately) or an external antenna jack — and if so, what type. To connect the Super Cantenna to your device, you’ll need one of a half-dozen available 18-inch pigtail cables which cost an additional $19.95. (10 foot cables can be had for $10 more.)

If you don’t know what type of connector you have (this information isn’t always listed in the documentation), the Wireless Garden Web site maintains a “Pigtail finder,” a lookup list of devices from numerous hardware vendors with the type of antenna connector they use. Don’t assume that all devices from the same vendor use the same connector, because they don’t.

The Super Cantenna has a quarter-inch threaded mount compatible with standard camera tripods. The company also offers its own $14.95 mini tripod suitable for desktop use, with legs that extend to about seven inches in length. (The Super Cantenna, 18-inch pigtail cable and tripod are available as a bundle for $49.95, or $59.95 with the longer cable.)

The Super Cantenna is a 12dBi gain antenna with a 30-degree beam width. As such, it’s designed to provide a stronger signal and greater range (at least in a focused direction) than either an omni-directional or flat panel antenna. This makes it ideal for trying to reach dead spots inside or outside a home, sharing a signal with your neighbors (assuming you like them), or even to use outdoors (the unit is weather-resistant) for a point-to-point link with another network.

Physically connecting the Super Cantenna to my WLAN router (a Linksys WRV-54G) was trivial, involving nothing more than unscrewing the included antenna and replacing it with the pigtail connector.

If your aim is to connect to another antenna or provide a signal in a certain direction, all you really need to do is point the Super Cantenna in the direction you want the signal to travel. If, on the other hand, you’re looking to illuminate a dead or weak spot without significantly reducing signal strength in other areas, it isn’t quite as simple as point and shoot. In this kind of scenario, the Super Cantenna’s relatively narrow beam width means that you’ll likely have to spend some time fine-tuning the antenna’s position. The tripod makes this pretty easy to do — its tilt and swivel lock and telescoping legs let you rotate and elevate the Super Cantenna in a variety of different ways.

On the other hand, my testing was conducted in an approximately 1,100 square foot home that’s all on one level. In larger or multi-story homes, or in structures with a lot of obstructions, it may take significantly more trial and error to find a happy medium. You may also find the need to place the antenna higher than the included tripod will permit, which would require an alternate form of mounting.

Folks who need to push a wireless signal further than the included omni can muster will find that the SuperCantenna’s inexpensive price and wide compatibility make it a good choice.